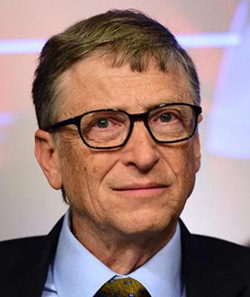 BILLIONAIRE philanthropist Bill Gates kept his spot as the world’s richest man, a rank he has held for 16 of the past 21 years, Forbes magazine said Monday.
The Microsoft co-founder’s fortune increased $3.2 billion since last year to $79.2 billion, the business magazine said, despite a $1.5 billion gift of Microsoft shares to the Bill & Melinda Gates Foundation in November.
Mexican telecom tycoon Carlos Slim held onto second place thanks to his $77.1 billion, ahead of American investor Warren Buffett, with $72.7 billion.
The so-called Oracle of Omaha was the biggest gainer of the Forbes list this year, up $14.5 billion from last year riding on the rising share price of his Berkshire Hathaway.
In fourth was Amancio Ortega, founder of the Inditex fashion group that includes Zara clothing retail shops. He counts a fortune of $64.5 billion.
Facebook co-founder Mark Zuckerberg jumped five spots to land in number 16, the first time he made it within the exclusive circle of the world’s 20 richest people.
Jack Ma, whose Alibaba online marketplace made the biggest global IPO ever last year, was ranked among the world’s 50 richest people, along with two other Chinese nationals.
The number of billionaires is growing steadily, breaking an all-time record this year, with 1,826 — up from 1,645 last year.
The rise of the dollar against the euro, along with plunging oil prices, had a significant impact on this year’s list.Advertisement