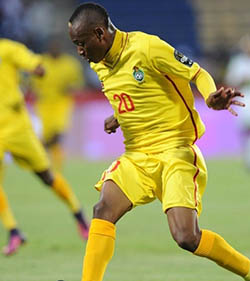 GABON: Khama Billiat is determined to learn from his experiences with the Zimbabwe after the team crashed out of the African Cup of Nations in Gabon.
Zimbabwe opened their campaign with a 2-2 draw against Algeria, before a 2-0 loss to Senegal and a 4-2 defeat against Tunisia saw them fail to advance from the group.
The Mamelodi Sundowns player said that mistakes were to blame for the team’s downfall, but said his team-mates were going home with more knowledge on how to play in big tournaments.
“It was a tough tournament and once again lack of concentration cost us the game. We had talked about this as a team after our two games but we repeated the same mistakes against Tunisia,” Billiat said
“We could have done better in the first 15 minutes which are very crucial but we have been conceding goals, thus finding ourselves in a very difficult position and we found ourselves in the same problems against Tunisia.
“We are however taking positive lessons and we will go back to our clubs and be honest to ourselves and next time maybe we will play much better.”
On the interest from many clubs after his great performance in the tournament, Billiat was forthright.
“I will go back to Sundowns since I am still contracted and committed to them, then we can talk about my future.”Advertisement