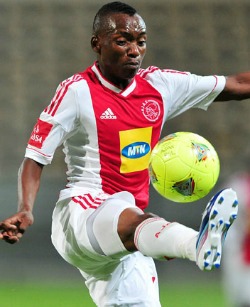 ZIMBABWE international Khama Billiat has been presented with a chance to play his football abroad after he was invited for trials with top Russian club Lokomotiv Moscow this week.
The winger welcomed what he described as a big chance of his career.
“I am just excited and I am hoping for the best,” he said.
“It is a big chance that has come my way, Lokomotiv are a big team and I hope to grab the opportunity with both hands.”
According to Kick Off, the Ajax Cape Town winger was scheduled to fly out to Russia for a four day trial stint with Moscow based club.
BillIat, arguably the one of the most sought after players in the current the transfer window with Orlando Pirates and Mamelodi Sundowns reportedly battling out for his services has previously stated his desire to play his football abroad.
Mickey Paiva, the South African agent brokering the deal, revealed the Warriors was set to fly out of the country on Monday to link up with Lokomotiv at their pre-season camp in Slovenia.
“Khama is leaving today (Monday) for a final assessment with Lokomotiv Moscow,” Paiva told KickOff.com. “They have been very satisfied with the DVDs we have shown them and now it’s just to look at him close up.
“It will be a great move for the player because Lokomotiv are a club with massive history – this will be a great chance for him.”
Paiva says they expect a final answer at the end of the week.
“He will be there for four days and then we’ll see what they come up with. I will then sit with Ajax Cape Town and his agent, Edzai Kasinauyo, who have been very cooperative in making this happen, to see what is best for Khama.”
Kasinauyo added: “He will go for a week in Slovenia where he will link with the team that is already in that country for a pre-season training camp so Khama is flying direct from Cape Town.
“I think it’s a good opportunity for him because Lokomotiv are a big club in Russia who have regularly competed in the Champions League and if he makes it, it will give him a chance to showcase his talents on a bigger platform and even open other windows for him.
“Lokomotiv have a new manager who is building a new team and looking to bring in fresh talent and Khama might just be one of them.
“The player himself is very excited about it all and he is looking forward to the challenge, so hopefully he will enjoy his stay there and come back with positive news.”Advertisement

Despite having established European-based stars like Vedran Corluka, Felipe Caicedo, Roman Pavlyuchenko and Nigeria’s Victor Obinna in their ranks, Lokomotiv have struggled in recent years and finished a disappointing ninth in the previous League season.
Billiat is just but one of a number of Zimbabwean players seeking pastures anew.
Former Dynamos and Warriors striker Takesure Chinyama is set to be offloaded by Orlando Pirates after he was plagued by injuries and according to reports has already been notified of his
fate.
He arrived at Pirates having gone through a successful stint in Poland where he once scooped the Golden Boot award and the South African giants had to fork out a reported US$150 000 for his services despite a troublesome knee.
In addition, ex-Monomotapa and Warriors midfielder Brian Mapfumo will also go for trials at Absa Premiership side Platinum Stars. He has been playing for Township Rollers in Botswana.
“Platinum Stars have been monitoring his progress ever since he moved to Botswana six months ago and they indicated that they wanted a closer look at him,” the player’s agent, George Deda said.