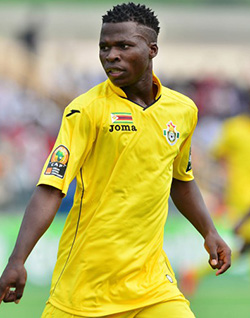 ZIMBABWE international Khama Billiat has tipped new Kaizer Chiefs signing Mitchell Katsvairo to make an impact at the club.
The reigning South African Footballer of the Year is a product of the Aces Youth Academy in Zimbabwe and played alongside Katsvairo at the soccer school before he joined Ajax Cape Town of South Africa.
And Billiat has intimate knowledge about Katsvairo from their days at the academy.
“I played with him at the Aces Academy a long time back and he left when I was still there.
“We were still young and he became a professional before me,” the Sundowns star, who was with the Aces Academy from age 11 told the Sowetan.
He described Katsvairo as a “good striker” and believes his compatriot can give the PSL defenders a tough time in the new season.
“He is strong on the ball and he fights for everything. He is a guy who likes to score goals and works for the full 90 minutes,” Billiat said.
He added Katsvairo’s move to Chiefs, as well as that of compatriot Edmore Chirambadare, augurs well for Zimbabwean football especially after the Warriors qualified for the 2017 Africa Cup of Nations.
“It is exciting. It has been long coming and we have been working hard. It is really a good feeling.
“The nation [Zimbabwe] has been hunting for players that would take us to the Afcon again and it should be a great feeling for the country that we have qualified.”Advertisement