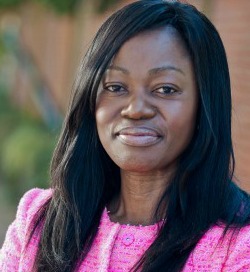 IT’S 3pm on a crisp August afternoon in Johannesburg, South Africa. Tsitsi Masiyiwa is seated on a comfy couch in a makeshift living room at her elegant office in the leafy suburbs of Dainfern, north of the city.
I meet her when she is in a deep conversation with a South African journalist and one of her office employees. I sit down to join the conversation and Masiyiwa recounts a fascinating story.
The year was 1996 and Masiyiwa and her husband, Strive Masiyiwa, were almost penniless. The couple was going through a rough patch, and they were struggling to feed themselves and their children.
“We were so broke. We couldn’t even afford to give our visitors tea,” Tsitsi Masiyiwa says in retrospect. “We were practically living from hand to mouth.”
But things hadn’t always been this way. Just a couple of years before, Strive Masiyiwa owned a thriving business. He had founded Retrofit Engineering, an electrical contracting firm that handled lucrative construction contracts for the government and had built a considerable fortune.
But his fortunes reversed in 1993 when he decided to establish Zimbabwe’s first independent mobile telecoms network to rival the government-owned telecommunications company, the Post & Telecommunications Corporation (PTC) then the sole provider of telecommunication services in the country.
Reversal of fortunes
When Masiyiwa expressed his interest in acquiring a mobile operating licence and launching a substitute mobile telecoms network, the government threatened to prosecute him if he dared to pursue his plans. The authorities denied him a license.
Refusing to bow to intimidation, he took the government to court, challenging the government’s monopoly on telecommunications and seeking the rights to operate a mobile phone company. It was a landmark case that lingered for close to five years, eventually finding its way to the Supreme Court.
“Our problems began when we sued the government,” Masiyiwa recollects. “You cannot sue the government and think things will always be right.”
During that period, the government, which was Retrofit’s biggest client, immediately called off its existing contracts with the firm. It had disastrous consequences for Strive Masiyiwa. Within months, he could hardly afford to pay salaries and he finally had to sell off the company’s assets to finance Econet’s legal battles against the government. Before long, the Masiyiwas’ funds had dried up, and they were on their wits end.Advertisement