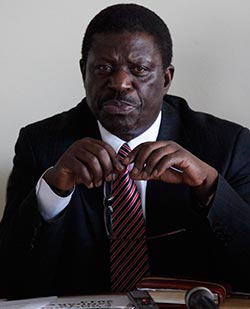 INDUSTRY and Commerce Parliament Portfolio Committee has revealed that government could be losing revenue in shady scrap metal deals.
The MPs said this to Industry minister, Mike Bimha, who was appearing before the committee chaired by Masvingo Central legislator Edmond Mhere on Thursday.
Bimha had told the committee that he had requested the Mines ministry to assist with valuation of scrap metal with a view to creating an alternative revenue source at a time the steel companies have seized operations.
According to the committee, a former manager at the now defunct Lancashire company recently sold 23 tonnes of scrap metal for $1 900 to an unspecified buyer.
“There was scrap metal which was sold. When $1 900 is realised from 23 tonnes of scrap metal it seems there is a problem there. It was discovered when we went to Lancashire steel,” said Mhere.
He added, “The guy who is supposed to be in charge, the acting general manager but his job was with human resources, he blatantly refused that no truck had been there.
“Until honourable members showed him the tyre tracks and other issues until he admitted that a truck had come in. There are sentiments that there could be a lot of underhand deals happening.”
Bimha admitted the defunct steel companies and government have been losing assets and revenue respectively.
“Of course there is a problem when scrap metal is sold at same prices as maize. I don’t think you could be wrong, when operations seize, a lot of things happen,” said the minister.
“There will be a lot of people scratching their heads thinking what can I help myself to. We were also getting reports of people taking stuff and these are people who know where those things are.”
Research show steel was, as of 15 February 2017, trading at $300 per tonne. The metal’s market value has been discouraging in recent years.
The committee sought to understand alternative ways that Bimha was exploring to assist government meet pension and salaries arrears for ZISCO employees.
Finance minister Patrick Chinamasa had promised to allocate some money but it has remained just a promise being a minister presiding over empty coffers.Advertisement