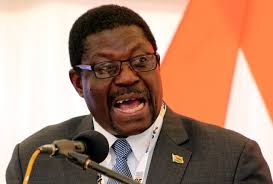 The minister said value of addition of soya beans would save the country millions lost in the importation of crude oil.

“The goal was to facilitate value addition of 33 000 metric tonnes of soya beans by 10 April. The oil expressers have been importing crude oil worth $5 million per week to refine into cooking oil,” Bimha told parliament recently explaining his 100 day plan.

He added, “In an endeavour to promote the soya beans value chain and to reduce the import of crude oil, oil expressers are expected to import and value add 33 400 metric tonnes of soya beans within the 100 days.

He said the ministry, in consultation with players in the soya value chain, had established that 16 700 metric tonnes of soya beans was required per month for crushing but there was no money to procure.

“The ministry of Lands, Agriculture and Rural Settlement has issued permits amounting to 17 700 metric tonnes as of February against a target of 33 000 of 33 400 metric tonnes,” said Bimha.

“The Reserve Bank of Zimbabwe has not allocated funds for soya beans importation. However 42, 7 million was availed for crude oil to minimize the pending impact of shortages of cooking oil.