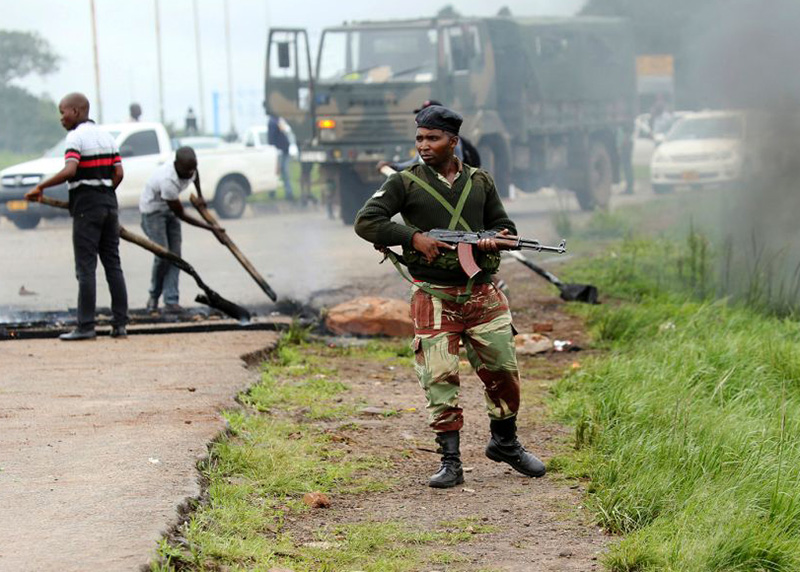 File Pic: Two soldiers were killed by gold panners after a violent brawl over women
Spread This News

AN internal police memo has revealed details and names of soldiers who were murdered in cold blood following a brawl with gold panners over prostitutes.

The deceased soldiers have been identified as Shaw Tizora (33) of Paradise Park in Marondera and Tawanda Gwarega (35) of Glen Norah C in Harare.

The memorandum reveals that Tizora was attached to ZNA Band Artillery Brigade, Domboshawa and his rank was Bomberdier.

Gwarega was attached to Ambulance Company ZNA Artillery Field Domboshawa and held the rank of corporal.

According to the police, circumstances  surrounding the case are that:

The group is said to have left Club 10, Chiwaridzo, Bindura proceeding towards Chipadze Secondary School, in the same town Khuumani and the now deceased are camped preparing for the independence celebration.

It is alleged that after walking for about 70 metres along Chiwaridzo Aerodrome Road, Bindura, Khuumani indicated that he was not interested in going to the campsite but instead wanted to return to the bar.

“His companions declined his idea and persuaded him not to return to Club 10. A scuffle ensued between the Khuumani and his companions.

“As Khuumani was being pulled by his companions against his will, he slapped Chitabura once on the cheek and she screamed,” the memorandum says..

It is alleged that the accused heard the scream and he came from the same Club 10, Chiwaridzo in Bindura, in the company of Alexio Gumbato a male adult aged 36 years, of Chipindura Street, Chipadze in Bindura and other unknown male adults.

The accused identified in the memorandum as “Top Take (NPFK)” enquired as to what was taking place, to which Khuumani responded with an unprintable insult.

It is alleged that, Pfuwe was struck with a bottle on his right shoulder before he escaped and sought help as well as medical attention. Chitabura also escaped and reported the scuffle at Chiwaridzo Police Station while another woman Ngozo shouting for help that never came.

Witnesses claim the accused were picked up by a vehicle that was heading to Chipadze Business Centre. Police ferried the now deceased to Bindura Provincial Hospital who were they were pronounced dead on arrival.

Police also sought to rubbish reports that the fight was over prostitutes instead claiming Khuumani and Chitabura are siblings.

The police said the “accused” thought Chitabura “was a lady of the night who was being assaulted when she screamed after being slapped by her brother.”

However, it was also established that, the accused person is an illegal gold panner of no fixed abode but he frequents Mazowe panning areas.