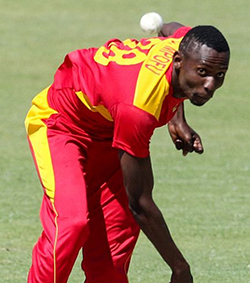 BULAWAYO: Devendra Bishoo spun West Indies to a 117-run win over Zimbabwe in the first test on Tuesday, collecting nine wickets in the match as victory was secured right at the end of Day 4.
Legspinner Bishoo returned 5-79 in the first innings and 4-105 in the second as Zimbabwe was all out for 316 chasing a target of 434.
Bishoo’s performance in the first innings was game-changing, helping to bowl the home team out for 159 and allowing West Indies to take a 60-run first-innings lead.
West Indies set the Zimbabweans the big target after half-centuries by Kraigg Brathwaite (86) and Roston Chase (95) took it to 373 all out in its second innings.
Seeking a century, Chase added just four runs to his overnight score before he was bowled by Sean Williams early on the fourth day.
Zimbabwe resisted with 57 from opener Hamilton Masakadza and 73 from Brendan Taylor at the start of its chase.
But Bishoo ran through Zimbabwe’s middle order for his four second-innings wickets. Chase (2-61) sealed victory by ending a stubborn 53-run last-wicket partnership for Zimbabwe between Chris Mpofu and Kyle Jarvis.
Mpofu and Jarvis forced the West Indians to take the extra half-hour at the end of the day to close out the win, and the tailenders nearly saw out the day with some carefree hitting. Mpofu struck four fours and a six for his 33 off 32 balls, finally falling caught on the long-on boundary attempting another big shot.
Slow bowlers took 28 of the 40 wickets in the test, underlying the spin-friendly nature of the Bulawayo track. While Bishoo finished with nine, Zimbabwe captain and legspinner Graeme Cremer collected eight wickets in the match and Zimbabwe’s part-time spinner Sean Williams took six.
The second and final test is also at Queens Sports Club, starting on Sunday.
Advertisement