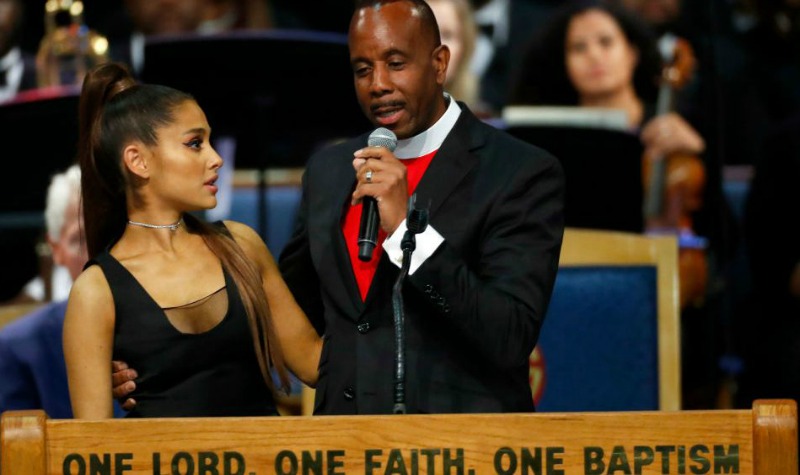 The bishop who officiated Aretha Franklin’s funeral has apologized to Ariana Grande for his “too friendly” physical contact with her onstage and for making fun of her name.

Bishop Charles H. Ellis III, who led the funeral, awkwardly greeted Grande after she performed Franklin’s 1968 hit “(You Make Me Feel Like) A Natural Woman.” He held her close, with his right arm around her and his fingers pressed against the side of her chest, as he jokingly said he thought her name was a new item on the Taco Bell menu.

Ellis, pastor of Detroit’s Greater Grace Temple, where the ceremony was held, apologised Friday in an interview with The Associated Press at the cemetery where Franklin was buried.

“It would never be my intention to touch any woman’s breast,” Ellis said. “I don’t know I guess I put my arm around her,” Ellis said. “Maybe I crossed the border, maybe I was too friendly or familiar but again, I apologise.”

He added: “The last thing I want to do is to be a distraction to this day. This is all about Aretha Franklin.”

While many viewers did not notice the body contact or the comment, it soon spread on social media, under the hashtag #RespectAriana. Looking closely at the video (below), Ellis does seem to be simply cuddling her, but with his right hand in an inappropriate, or at least unfortunate, position.

“I personally and sincerely apologise to Ariana and to her fans and to the whole Hispanic community,” Ellis said.

“When you’re doing a program for nine hours you try to keep it lively, you try to insert some jokes here and there.”

Grande had been on the receiving end of criticism earlier in the show for the shortness of her dress, which broke with a common “below the knee” unofficial church standard.

A rep for Grande did not immediately respond to Variety’s request for comment; a rep for Greater Grace Temple responded with a link to the Associated Press article including Ellis’ apology; Ellis tweeted two articles about his apology early Saturday.