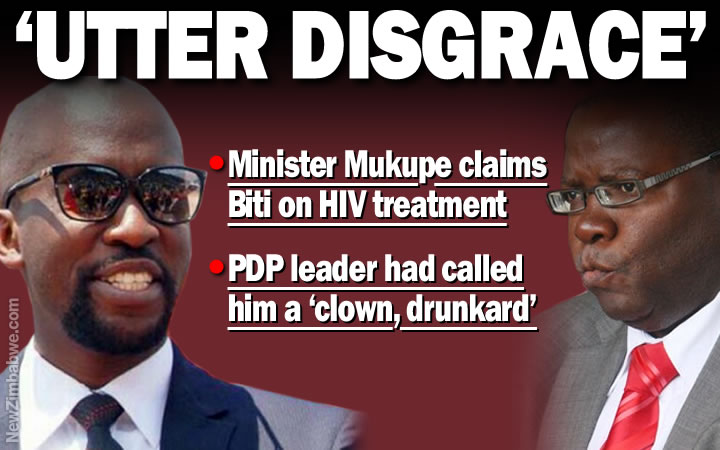 It was the second time Mukupe has caused outrage this week after he was strongly reprimanded by the government for claiming that the military would not allow MDC Alliance leader Nelson Chamisa to take over power if the latter wins elections expected this July.

Mukupe is the seating MP for Harare East with Biti one of his main challengers in the constituency.

Earlier this week, the Zanu PF official had described Biti as the country’s worst ever finance minister, prompting the radio station to invite the PDP leader to defend himself.

Programme presenters had a torrid time to restrain Mukupe from repeatedly interjecting while the PDP was speaking.

A frustrated Biti then said he found it demeaning for the radio station to invite him to debate a clown.

“If you hold a public office you must be serious; you can’t be a clown. So, kundidaidza kuno (inviting me) to come and debate with such clown, I find it very demeaning.”

Mukupe shot back saying; “If you are going to start trading insults … can you take that back! Biti has a problem of always resorting to insults.

“Wambonwa mapiritsi ako here nhasi (did you take your tablets today)?”
Stunned programme presenters reminded Mukupe that the show was being broadcast live.

The minister’s remarks drew outrage on social media with many demanding his sacking.

I hope the Govt issues a press statement condemning Mukupe’s utterances as “reckless & most unfortunate.” There’s no honor in mocking/stigmatizing HIV. It’s a matter of regret that he weaponized an issue the nation has made so much progress on.

Politics aside, this is sad. pic.twitter.com/n38vtNYmmd

Mr President @edmnangagwa how did this chap become a minister in your government? What kind of behaviour is this – reversing all the gains that have been made to de-stigmatise HIV/AIDS by making such stupid and cheap comments? This chap is a liability. https://t.co/Ux3f5ZqSK9

A journalist also claimed that Mukupe had assaulted his wife who was part of the production team during a separate radio interview on the same day.

The minister was however, defiant, quipping;

Can’t someone take that pick from his hands? Mukupe just keeps on digging the hole. First he says the military will not respect the will of the people. When challenged he draws the race card & accuses his critic of racism. Now he deals the HIV card. Rey cheap. Utter disgrace. https://t.co/QFWaDuUWJE