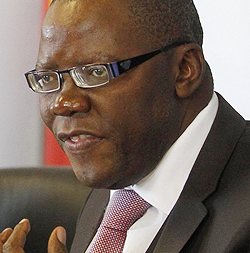 ZIMBABWE’S banking system needs “democratisation”, Finance Minister Tendai Biti said on Thursday as he revealed that only 19 percent of Zimbabweans had access to financial institutions.
The government will shortly announce new regulations for the banks to compel them to make their services more accessible even for the rural areas, reduce the cost of banking and increase the use of debit cards.
“There is no financial inclusion in Zimbabwe. Only 19 percent of Zimbabweans are banked and one brick and mortar branch is serving 77,000 people. That’s not good enough,” Biti told a news conference in Harare.
“If you go to the rural areas, people put their money in muhozi (granary). If it’s women, my own grandmother, they put their money in funny parts of their anatomy. It’s not good enough. So we need to ensure the democratisation of the banking services.”
He said there was need for the sector to roll out services into the rural areas to enhance accessibility, citing the Kenyan experience, where rural shops are able to offer banking services to the people, as a case study to adopt.
He went on: “Mobile banking and electronic banking can solve some of the problems, but they are not extensive. One of the things we are trying to bring under the banking amendments, we agreed with the financial sector, is that we are going to allow what we call bank agencies like they did in Kenya.
“The second intervention we have proposed is that of e-banking, in Zimbabwe you still find people using cash. We need to start using debit cards.”
Biti said the spate of bank failures and negative real returns on deposits has over the years eroded customer confidence in the sector, resulting in most people and businesses conducting their transactions outside the formal banking channels.
He said the government will this week gazette comprehensive banking reforms to prevent future bank failures through a series of interventions such as ensuring that every bank lists on the stock exchange as well as extending liability to the bank owners and directors should the bank fail.
Meanwhile, Biti trashed threats by his Indigenisation and Empowerment colleague Saviour Kasukuwere on the sector, saying the law requires that there should be discussions with the sector representatives before any changes are made. Those consultations are still in progress.Advertisement

“On the indigenisation of the banking sector, we have made it clear to Minister Kasukuwere that according to his own regulations; the indigenisation of a sector can only take place in consultation with the line minister, in this case the Minister of Finance. We have not consented,” Biti said.
“This is why you have not heard us make a comment on this issue because we still need to follow the law and the law is clear that there has to be sectoral agreement.”
Kasukuwere has recently threatened foreign-owned banks with forfeiture of their licences for failing to cede majority shareholding to locals in line with the law. But the minister faces opposition from Reserve Bank governor Gideon Gono and Biti who say banking should be ring-fenced because it is a “sensitive” sector.