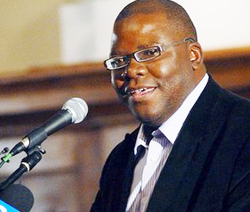 ZIMBABWE needs about US$4 billion as a stimulus package to enable economic growth, former Finance Minister Tendai Biti has said.
Addressing journalists in Harare Tuesday afternoon at the MDC-T party head office Biti said there was an urgent need to inject a stimulus package.
“That stimulus package will attend to the issues of infrastructure requirements that are bedevilling this country,” Biti said.
He said a billion dollars has to be put towards energy and some amount has to be put towards the productive sector, in particular the industry.
“Most importantly, as part of that stimulus package there has to be meaningful amounts that have to be pulled towards the lender of last resort at the central back,” Biti said.
Biti said the economy is facing a liquidity crisis.
“There is simply no money. Broad money supply has contracted in the economy. To induce the economy, to move out of the slump there has to be the lender of the last resort facility at the central bank.”
Biti dismissed the solutions offered in the 2014 national budget saying they will succeed.
“We do not believe that the African Import-Export bank will offer US$100 million to the government of the day. The import and export bank is a trade bank and is not designed to offer this kind of assistance,” Biti said.
Biti said the stimulus package is important to deal with the supply side of the economy, “agriculture mining and most importantly industry.”
The former finance minister said capacity utilisation is slowly crippling towards 25 percent.
Biti said the government needs to engage the international community to normalize the situation.
“It’s important that the government engages the international community. Dealing with the international community on the basis of slogans of hatred on the basis of exclusion is no solution at all,” Biti said.Advertisement