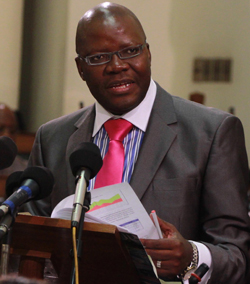 THE IMF should treat Zimbabwe in the same way it does other countries and must not shift goal posts or change agreed benchmarks on political grounds, Finance Minister Tendai Biti told a meeting at Chatham House in London on Wednesday.
Biti, who confirmed recently that Zimbabwe had reached a tentative agreement with the fund on a staff monitored programme (SMP) to help the country manage its economic reforms and clear debt arrears, was en-route from Washington, US, where he met IMF officials.
“We’ve done better than some countries,” he told the Chatham House meeting, “But the problem is that Zimbabwe is treated on the basis of its politics and not on our balance sheets.”
Biti said that he told IMF managing director Christine Lagarde that “equality of treatment [must] be respected; we don’t want shifting of targets.”
The Fund’s executive board last October relaxed the restrictions on IMF technical assistance to Zimbabwe that resulted from the country’s protracted financial arrears to the Poverty Reduction and Growth Trust, paving the way for the SMP agreement.
SMPs are informal agreements with IMF staff whereby staff provide advice to national authorities on the design of their economic programme, and monitor the implementation of such a programme. However, they do not entail endorsement by the fund’s executive board nor financial assistance.
Zimbabwe owes an estimated $10 billion to the IMF, the World Bank and African Development Bank (AfDB).
Biti lamented the country’s unflattering D-Minus credit rating. He said a special team that was set up to verify the country’s sovereign debt had completed 96 per cent of it task.Advertisement