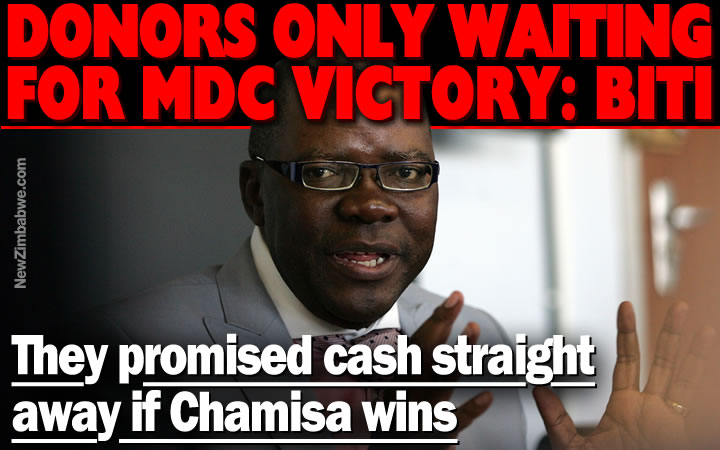 EUROPEAN donors are ready to inject funding into Zimbabwe once the MDC Alliance is elected into government, former finance minister Tendai Biti has said.

Biti and his PDP are a key part of the MDC Alliance whose presidential candidate MDC-T leader Nelson Chamisa who has been derided for claiming that the US government promised him $15 billion if he wins elections expected in July.

Sunday’s rally came after the alliance leaders returned from a trip to the United Kingdom where they held meetings with some British government officials.

“This election is about finding a new development partner,” said Biti

“We were in England recently where we received an overwhelming response from donors who want to inject their funds and bring Foreign Direct Investment (FDI) into our country. There are a lot of donors awaiting the MDC Alliance government.

“We saw some elders in UK who promised us that if Chamisa wins the forthcoming polls they will bring funding and FDI straight away to Zimbabwe.”

The ruling Zanu PF must held criminally responsible for under developing Zimbabwe, particularly areas such as Bocha and Chiendambuya, Biti added.

“It`s so sad that $15 billion (in diamond revenues) was stolen yet Bocha is poor and under developed.

“Zanu PF must be held criminally responsible for under developing the country. That’s indictment because they have failed the people of Zimbabwe.”

He also lamented the poor state of Zimbabwe’s infrastructure, noting that only 10 percent of the country`s roads were tarred.

“What was left by Ian Smith is what is still there or dilapidated. There is no meaningful development to talk about in the country,” said Biti.

Statistics released by United Nations agencies on children’s and women`s health in Zimbabwe were also disconcerting.

“The statistics by UNICEF with regards to health of children and women in the country are not pleasing considering that it’s now 38 years after we attained independence as a country, “said Biti.

He added; “We want people to choose their leaders freely without fear.

“Soldiers must go back to their barracks. We want SADC, European Union (EU), and United Nations to be guarantors of these elections.

“We don’t want a previous situation where our President Morgan Tsvangirai won the
election but failed to take up power.”