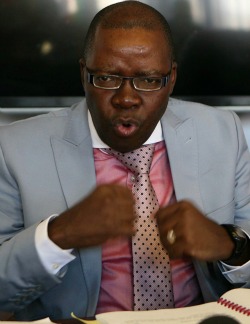 WITH less than a week before elections, Finance Minister Tendai Biti slashed the country’s growth forecast Thursday, citing the impact of political uncertainty surrounding the vote.
Biti said the first half of the year had been “a nightmare,” as he revised 2013 growth down to 3.4 percent from an anticipated 5.0 percent.
“A decline in political situation is leading to a decline in economic situation,” he said.
“We are living from hand to mouth. The fundamental challenge facing us is lack of production.”
The drop is expected to be most acutely felt in the mining sector.
Growth in the sector was revised down from 17.1 percent to 5.3 percent.
Biti however reported that most of the funding for the July 31 presidential and legislative votes had been found.
The treasury has disbursed $96 million for the vote and $36 million was yet to be disbursed.
“We are ready for elections without help from anyone. We have done this without raping the economy.”
The government had sought more funding from the UN, but the request was withdrawn amid a row over UN election monitors.
Zimbabweans go to the polls on July 31 to choose a successor to the shaky power-sharing government formed four years ago by President Robert Mugabe and Prime Minister Morgan Tsvangirai.
But Biti questioned whether the country could afford to fund a run-off election, if there is no clear winner in the first round of voting.
“This will put unbelievable pressure on this economy,” he said.Advertisement