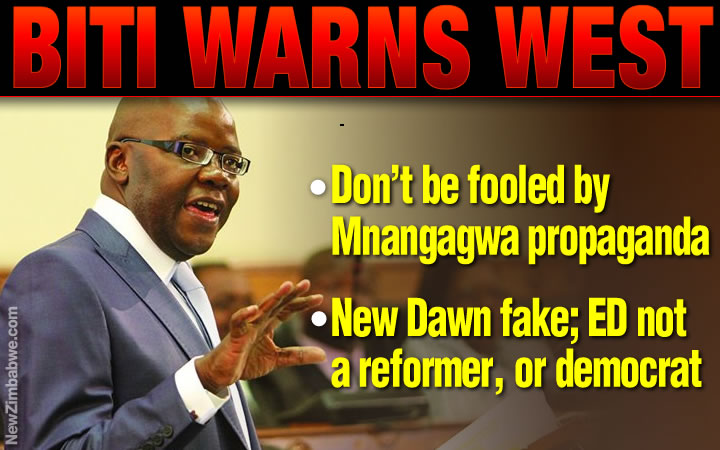 “Some world leaders seem to believe the charade that a new dawn has somehow arrived in Zimbabwe. It has not.”

PRESIDENT Emmerson Mnangagwa did not seize power in coup and then, miraculously, become a reformer or a democrat overnight, former finance minister Tendai Biti has warned the West.

In an opinion article for the US-based Washington Post, Biti warned the international community against fooled by the carefully constructed narrative which is presenting Mnangagwa as pro-reform and a born-again democrat.

“To our friends around the world: Do not be fooled by the propaganda and false promises being promoted by well-funded lobbyists in Western capitals.

“Mnangagwa remains who he always has been,” wrote Biti who is also leader of the opposition People’s Democratic Party (PDP).

Before he took over power on the back of a military revolt last November, Mnangagwa was seen as the key enforcer of the predecessor Robert Mugabe regime.

Mnangagwa was at Mugabe’s side over the 37-year-reign highlights of which include the 1980s Gukurahundi campaign which left some 20,000 civilians dead.

However, after toppling his boss with the help of the military, Mnangagwa has distanced himself the disastrous policies of Mugabe and his violent political methods.

The new approach has been backed by a local and international charm offensive which preaches non-violence and political tolerance at home while actively seeking re-engagement with the world, particularly the previously reviled Western governments.

To those who point out that he was, for long, Mugabe’s lead henchman, the so-called ‘Crocodile’ says he should be judged by what he is doing now.

And the international community seems to be succumbing to the seduction.

Said Biti; “The world has been introduced to him (Mnangagwa) in a carefully managed publicity campaign, designed to project an image of reform.

“Some world leaders seem to believe the charade that a new dawn has somehow arrived in Zimbabwe. It has not.”

The PDP leader added; “Rather than offering reform, Mnangagwa heralds a return to Zimbabwe’s dark past.

“In Zimbabwe, what’s past is prologue. Mnangagwa did not seize power in an unconstitutional coup and then, miraculously, become a reformer or a democrat overnight.

“His long record of abuse did not disappear, nor have his brutal tactics of repression.”