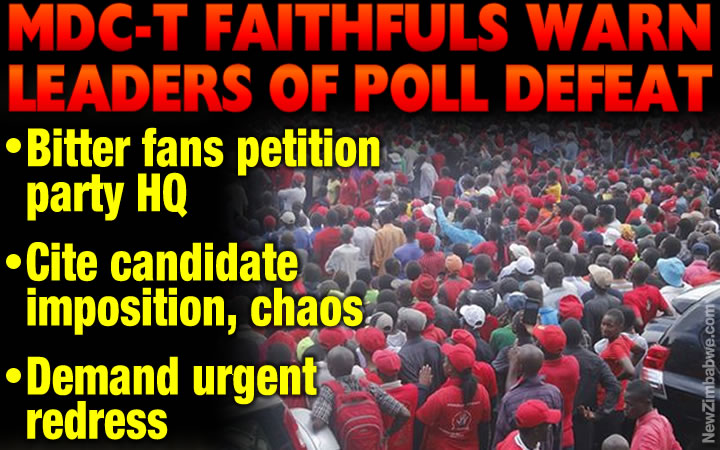 MDC-T supporters have ominously warned that the party risks losing the national elections if issues of candidate imposition, favouritism and general chaos which characterized the primaries are not addressed.

The MDC-T is part of the MDC Alliance a coalition which brings together a number of other splinter groups with Nelson Chamisa being the presidential candidate in the 2018 elections.

In a petition to national chairperson, Morgan Komichi, Concerned Citizens of Kwekwe in Support of the MDC-T have said party leaders in the gold mining city imposed unpopular candidates during the just ended primary elections.

“There is a general feeling of disgruntlement in the manner in which the elections were conducted. There were serious cases of candidate imposition and the party risks losing if the issue is not looked into,” said Jeremiah Mafirakureva Mafirakureva, the grouping’s spokesman.

“In 2013 we lost some seats because of candidate imposition it seems our party leaders are yet to learn from that mistake,” he added.

According to a letter gleaned by this publication and dated 24 April the MDC-T supporters warned the leadership that if it fails to address the concerns being raised the situation, “may derail the gains, progress and growth of the party to the effect that it would not be surprising if the movement fails to effectively meet its set objectives in the forthcoming elections.”

“We are of the informed persuasion that there are destructive machinations being instituted at grass roots level by elected and senior officials within the party as a deliberate ploy to frustrate aspirants and concurrently impose undeserving, unqualified and unpopular contenders onto the electorate.”

The letter added, “… there is a systematic arbitrary imposition of contenders who might be originating from outside the periphery of the constituency and have no track record within the party ambit.

“These very individuals are being pitted against sitting party representatives by senior elected officials aiming to create their fiefdoms, when they should aim their efforts at enemy territory and orphaned constituencies.”

The MDC-T supporters also said there was a serious misinterpretation of the party’s quota system.

“There is an unfair interpretation of the 20/20 quota system principle. To enact this resolution, the seats reserved for women and youths should be harvested form enemy territory not form our own sitting party representatives in home territory.

“If not implemented well, this strategy will stifle growth and development as ambitious party cadres will stampede and overrun each other in their own backyard instead of combating enemy frontiers and expanding party territory,” the letter reads.

The party supporters implored Komichi to look into the issues.

“We recommend your good office to establish a commission of enquiry to investigate and effectively deal with these non-progressive tendencies. We are certain the Movement will perform effectively in the forthcoming elections if and when these concerns are meritoriously addressed as they will impact the electorate positively,” the letter read.

Fingered in the candidate imposition and ‘godfather mentality,’ is former Kwekwe Central MP Blessing Chebundo who is also a National Executive Member.

Said a source who requested anonymity; “the source of disunity, candidate imposition and strife can be levelled against Chebundo. He is the chief architect of all the problems currently bedevilling Kwekwe.”

Chebundo who is Kwekwe Central Parliamentary Candidate in the coming polls in 2013 lost his seat to Masango Matambanadzo after being an MP since the turn of the millennium.

The former parliamentarian is accused of imposing disbarred lawyer Tapera Sengweni for a council seat in Kwekwe.

Sengweni, who is originally from Redcliff, is a losing parliamentary candidate for Redcliff constituency.

“I have nothing to do with those allegations which are levelled against me. I am a National Executive member and do not have anything to do with candidate selection,” said Chebundo.

National youth president Happymore Chidziva is also accused of imposing the Redcliff parliamentary candidate Lloyd Mukapiko who is going to square it off with Local Government Minister July Moyo.

Chidziva, in 2013, lost the parliamentary polls to Harris Ncube.

The youth wing leader has since migrated to Harare where he is contesting for Highfields West.

Efforts to get a comment form Chidziva proved fruitless as his mobile phone went unanswered.

Meanwhile, Midlands North Provincial Chairperson Sedwell Bhebhe confirmed the issues of candidate imposition in some areas where primary elections had to be suspended in the province.

In Gokwe, Kabuyuni primary elections had to be suspended after serious internal squabbles as some leaders are pushing for David Siyamukondo whilst the party seems to be favouring Kaynos Tagwirei.

In Mapfungautsi, MDC-T structures are resisting little known Kulamboni who has been seconded by an MDC Alliance partner, saying he is unpopular.