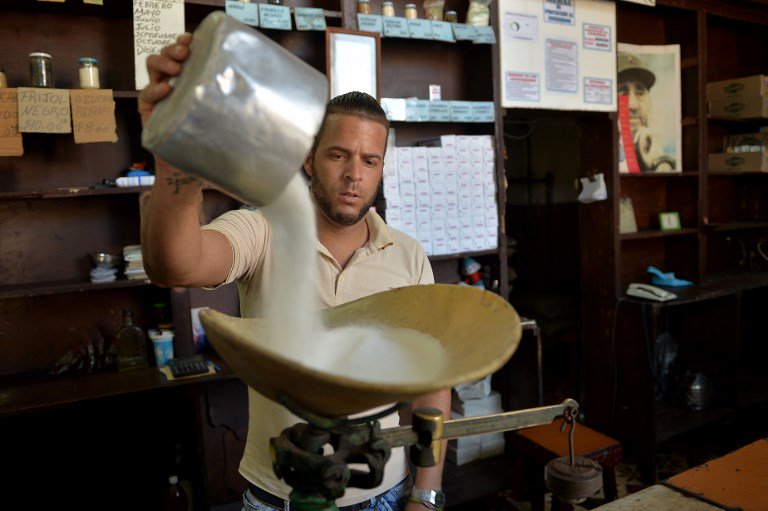 Sugar: it’s so quintessentially Cuban that even a young, machete-wielding Fidel Castro used to hack away at the cane stalks vital to the Caribbean island’s economy.

Now, the long-time world leader in sugar production is importing the stuff for the first time, and in large amounts, from France after another bad harvest.

Sugar used to account for the vast majority of Cuba’s exports. But the fall of its big brother, the Soviet Union — a key, hungry customer — changed everything, as did a lack of investment in seeds, fertilizer and pesticides.

To wit: in the early 1990s, Cuba produced about eight million tons of sugar a year. A decade later, it stopped reaching two million a year.

Back then, sugar accounted for almost 75 percent of Cuban exports. In 2015, it was only 13 percent, with other products like nickel and tobacco making up some of the difference.

The 2017-2018 harvest suffered badly after Hurricane Irma ravaged the country, followed by a long rainy season.

So Cuba is importing sugar from France.

On the island, residents quickly caught wind of the somewhat counter-intuitive development.

Here, sugar from cane tends to be brownish. But the French version comes from beets so it is whiter, and the granules are finer. And that is what Cubans started receiving with their “libreta” — their ration book.

Cubans quickly noticed the change in the sugar — when produced from cane, it tends to be brownish, but the French version comes from beets so it is whiter — and the granules are finer

“The sugar we get now is very good. It is very sweet, not very different. The only difference is the colour,” said Felicia Navarro, a 40-year-old homemaker.

The French government farm and seafood export agency FranceAgriMer said that from 2001 to 2017, Cuba had imported just three tons of sugar from France.

But in just three summer months this year — June, July and August — that number ballooned to 40,000 tons.

“This is the first time in history that Cuba is importing significant amounts of sugar from France,” FranceAgriMer said.

Cuba imports most of the food it consumes. Yearly, it imports 400,000 tons of wheat.

‘The Golden Age is over’

Sugar imported from France is somewhat of a humiliation for Cuba, which once was one of the world’s top suppliers

These new numbers are humiliating for Cuba, given its past as the world’s largest producer of sugar and one of the biggest exporters. Until 1960, the US was one of its main customers.

Then came the Soviets, who bought Cuban sugar at a discounted price. These days, sugar production here is disappointing.

The expected annual amount is 1.6 million tons, but it is actually just 1.1 million. And it is no surprise that Cuba has to import because it has export contracts with China to fulfil, said FranceAgriMer.

A British farm consultancy called FO Licht said it expects Cuban output to improve next season and reach 1.5 million tons — even if that is far from the big numbers it used to post in the 1980s.

Cuba’s government blames the US trade embargo, which since 1962 has blocked imports of badly needed farm and industrial equipment.

“The main obstacle to the development of the island is the embargo imposed by the United States,” Cuban President Miguel Diaz-Canel said recently, adding his people were “condemned to die of hunger.”

A woman buys sugar produced in France at a grocery store in the Cuban capital Havana — experts are hoping the sector can rebound on the island, possibly with some foreign investment

Cuba has been obsessed with diversifying its economy and making it less dependent on sugar exports, he said, but that has led to underinvestment — and the sector’s worst harvest in a century.

“The Golden Age is over because production capacity is not what it was,” said Perez.

There used to be 150 factories in Cuba for processing sugar cane. Now there are only around 50.

Cuba should turn over 15 or so to foreign investors who have shown interest, he added.

A new draft national constitution that will be voted on February should make things easier because it acknowledges that foreign investment is important to Cuba’s development.

Otherwise, said Perez, Cuba runs the risk of being short on sugar in the next few years.