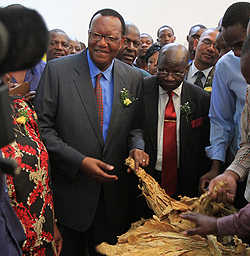 THE success story of tobacco farming in Zimbabwe can aptly be described as a heavily sugar-coated pill – very sweet outside but bitter inside.
Though lauded as one of the success stories of the land reform programme in the country, tobacco farming has left a trail of environmental degradation, a starving nation and a health compromised tobacco small-scale farming community.
Farmers use wood to cure tobacco, have abandoned food crops and the health implications of improper handling of tobacco chemicals to farmers are chilling to think of. In the past, smallholder farmers were credited for producing much of the grain crops in the country but the recent years have seen a significant shift from this previous trend.
And a farmer from Mutare district in Manicaland province, Witness Chinene summed it all when he said: “Our children will judge us harshly for destroying the environment and failing to feed the country.”
“Look here,” he added pointing to vast swathes of bare ground which used to be thickly forested by indigenous trees. “The trees are long gone because farmers have been cutting them indiscriminately to cure tobacco. But we still have nothing to show for this tobacco farming craze. Tobacco farming was a failure in most parts of this area. And many farmers were left with heavy debts and no food for their families.”
A visit to some households in some parts of Manicaland revealed a frightening drift as granaries have been substituted by crudely built tobacco barns. And the few granaries observed were either empty or showing signs of not having been used for ages.
Phibion Chadambuka, a farmer who tried to venture into tobacco farming, was left deep in debt and could not pay some of the people he had engaged to harvest and cure the crop. And a verbal spat with one of his handymen over non-payment could have degenerated into a bloody brawl had it not been for the timely intervention by other villagers.
Chadambuka had concentrated on tobacco farming, neglecting food crops hoping to buy maize after selling tobacco. Instead he was left deep in debt and his family with no food.  He remarked dejectedly: “There is nothing I can do my brother. Everything seemed to have been cursed”.  Despite being an octogenarian, Chadambuka still has primary school-going children with his second wife after the death of his first wife.Advertisement