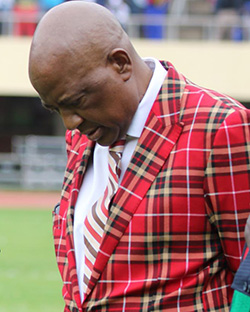 ZIMBABWE’S soccer federation folded with a debt of more than $6 million and has formed again under a different name, the federation president said on Monday.
The Zimbabwe Football Association disbanded at a meeting over the weekend and a new federation was created under the name the National Football Association of Zimbabwe, president Phillip Chiyangwa said.
He said the debt, which he blamed on the organization’s previous leadership, was passed over to a liquidator to deal with.
“I can tell you now that we don’t owe anybody anymore,” Chiyangwa said.
The bizarre process was approved by FIFA and done with the world body’s “blessings,” Chiyangwa said.
Zimbabwe’s federation had been in financial crisis for years because of a combination of mismanagement, alleged corruption, and the serious economic woes of the southern African nation.
At one point, ZIFA had to sell off assets, including an artificial training field, to raise money to pay its debts.
Zimbabwe was thrown out of qualifying for the 2018 World Cup by FIFA for failing, after numerous warnings, to pay a former coach wages it owed him. ZIFA said it wasn’t able to pay the $67,000 it owed.
The federation’s latest problems came as Zimbabwe qualified for the African Cup of Nations on Sunday for the first time in 10 years.
One of the last acts of the old ZIFA was to hand bans ranging from 10 years to life to a former national team coach and two former federation officials for attempting to fix games in the African Cup of Nations qualifying competition.
Former national coach Ian Gorowa and former executive committee member Edzai Kasinauyo were banned for 10 years.
Henrietta Rushwaya, once the federation chief executive, received a life ban for the second time for involvement in the attempted fixing.
Rushwaya was banned for life after a previous match-fixing scandal, but that sanction was overturned. The latest bans have not been ratified by FIFA.Advertisement