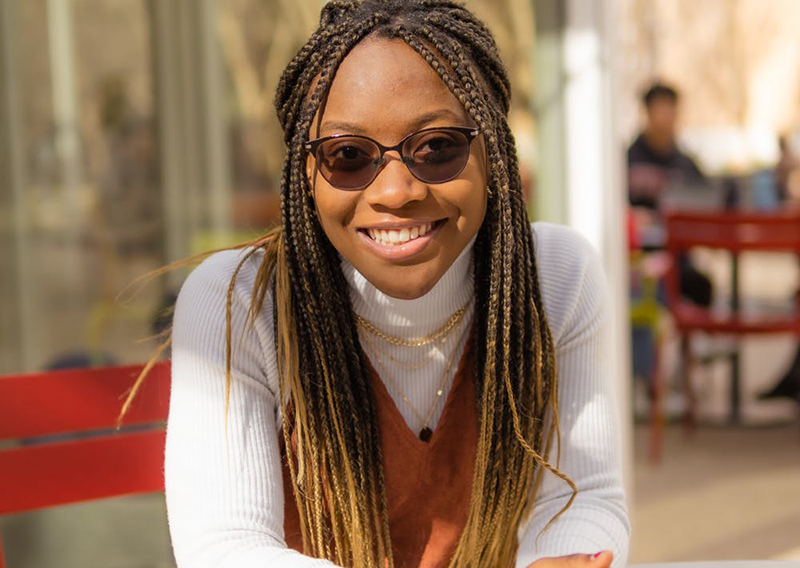 UNITED STATES: Where Karen Murambadoro’s family is from, people don’t really talk about neurodegenerative disorders. According to the Duncan College junior, her own family’s history of these disorders has propelled her to learn more about them by majoring in neuroscience.

According to Murambadoro, people in rural communities abroad may struggle to relate with Western physicians due to language barriers and incongruent beliefs.

“People [are] just trying to connect with physicians on some level, reaching and trying to find a connection they can use to advocate for themselves and receive the best care that they can,” Murambadoro said.

Murambadoro said she aims for a career in international rural medicine because of her family’s experience immigrating from Zimbabwe.

Both of Murambadoro’s parents were born in Zimbabwe. Her mom was from the capital city of Harare, while her dad was from a more rural area. Murambadoro said that her family immigrated to the United States in the early 2000s.

“I think because [I immigrated when I was 5 years old], I’ve never felt super connected to my Zimbabwean identity,” Muramadoro said. “For the sake of really trying to make it in America, I didn’t get to really connect with that part of my background.”

According to Murambadoro, her family is planning a trip to Zimbabwe, and her self-consciousness about her Zimbabwean identity makes her anxious about the visit.

“I really do want to go back home and see cousins and aunts and uncles and things like that but I’m also a little nervous because I don’t know the language. I haven’t been there in forever,” Murambadoro said. “I know my family loves me and would definitely want me to be there, but how would I fit into that space?”

Murambadoro said that she has also struggled with her identity as an African in America.

“I feel like there are a lot of racial things that are here [in the United States] that I faced that I feel like my family didn’t really entirely face when they were in Zimbabwe,” Murambadoro said.

According to Murambadoro, who grew up in Overland Park, Kansas, her race was most salient in high school.

“There [were] definitely a lot of spaces [that were] predominantly white,” Murambadoro said. “I was the only Black student in a lot of my AP classes. It definitely was a little disheartening to me to see that it was only me in those sectors.”

But Murambadoro’s experiences in those spaces with few other Black students motivated her to work hard and inspire others, like her younger siblings and cousins. She said she wants to be able to show the younger people who look up to her that they are capable of achieving and belonging in those spaces.

“A few months ago I heard that one of my cousins applied to college just because I did,” Murambadoro said. “I just want to be in a space where people can look and say, ‘She did it so I’m going to do it too,’ because there is no reason why I should be the only one in these spaces.”

“For me, [Rice’s Black community is] a lot more than I saw growing up,” Murambadoro said. “It’s very inspiring to me to see faces that look like me across campus, even if it’s smaller than you would want it to be. I feel like Rice has been a place where my race doesn’t play too much of a negative role in the way that it did when I was in high school.”

Murambadoro said that she likes to see the excitement and love for cultural shows like Soul Night and Africayé, but she feels that support for the Black community should be more consistent. While she appreciates the efforts in the Critical Dialogues on Diversity course, she thinks more attention should be paid to Black voices on campus.

“When things happen on the news to the Black community, I wish there was more of an effort to rally for those things altogether in the way we rally to celebrate Soul Night and Africayé where everyone shows up,” Murambadoro said. “I think that of late, it has been hard to cultivate those spaces and encourage conversations like that.”

Murambadoro said seeing Black student leaders at Rice inspired her to get involved in her residential college’s student government. She was an Orientation Week coordinator herself at Duncan last year.

“I was able to come in [during O-Week] and see a lot of representation,” Murambadoro said. “The president of Duncan was Black. We had a Black O-week coordinator. I felt very motivated to get involved with student government because I saw those faces [in leadership positions] that I had not seen ever.”

Murambadoro, who is a class representative at Duncan as well as a Rice cheerleader, said that she is grateful for the community she has found at her residential college.

“The fact that there are so many talented people here in your colleges and you can see them making a difference almost every day – that inspires me to [go] after the things that I am super passionate about and be really intentional with my time here,” Murambadoro said.

Murambadoro said that despite struggling with imposter syndrome and questioning her pre-med path in her freshman year, she thinks that Rice and the structure of student organizations have made her more confident.

“[Rice is] very, very student-centered. Students are carrying a lot of the organizations that exist on campus,” Murambadoro said. “At times it can be daunting. Sometimes it can be very tiring. But I think being put in those roles where you have to make the decisions, you have to have the conversations in order to make your vision come to life. Being in those scenarios has definitely empowered me.”

Murambadoro said that she has become more confident about her capabilities and identity as a student at Rice.

“I think that before I didn’t have that confidence because I just felt like, as a woman – as a Black woman – that people were automatically going to look at me and already have a judgment,” Murambadoro said. “Having those experiences where I have to make the calls has definitely empowered me to be able to do anything.”