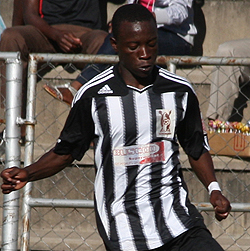 IN-FORM Black Rhinos who have been riding high on a streak of good performances after returning to the elite league, dismissed Highlanders in what many thought was an explosive tie at Morris Depot Wednesday afternoon.
The match ended 3-0 in favour of Black Rhinos with three goals coming from Herbert Rusawo and Lot Chiwunga who grabbed a brace.
Highlanders started off the better side mounting on the pressure. However, it was Rhinos’ Sydney Linyama who had the first real chance of the game when his header was cleared off the line by an alert Rahman Kutsanzira.
In the 41st minute, Ralph Matema squandered a great chance when he put the ball wide from close range.
The miss was to prove costly as Chiwunga put Rhinos in the lead with a low header into the bottom right corner just before halftime.
Three minutes after the break, Chiwunga made it 2-0 in Rhinos’ favour when he pounced on a loose ball after Ariel Sibanda had blocked Mukombwe’s shot.
Highlanders did have opportunities to get back into the game but could not take their chances.
In the 57th minute, Prince Dube failed to score with only the keeper to beat.
In the 69th minute, the lively Chiwunga earned his side a penalty when he was brought down in the box.
Rhinos’ keeper, Rusawo, made no mistake in converting the spot kick to make it 3-0.
The result saw Chauya Chipembere move to the top of standings with 26 points ahead of more action on Thursday.
In other matches played Wednesday, Chicken Inn made it four consecutive wins with a 2-0 win over ZPC Kariba at Luveve Stadium.
Guide Goddard gave the Gamecocks an early lead before Innocent Mucheneka wrapped up the game a spot kick just before the full-time.
FC Platinum registered another draw in a lively but goalless encounter against struggling Harare City while Triangle and Chapungu registered wins.
Advertisement