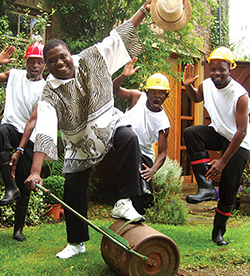 ON a coast-to-coast Canadian tour that includes Courtenay, Black Umfolosi gets great responses in the North American country, says Thomeki Dube.
“The reaction is amazing,” the founding member said in an interview from Ontario.
“Everybody loves this because it is very different from the other a cappella groups that come by.
“The reaction is really quite amazing,” added Dube, current tour manager for the singing and dancing group.
“One very special thing about Canadians is that Zimbabwe was once part of the (British) Commonwealth, the same as Canada. So there are quite a lot of similarities; people understand each other very fast.”
Zimbabwe is a former British colony, the reason English spoken widely in the country although there are at least sixteen other local languages.
“We do two songs in English,” Dube said.
“Obviously Canadians expect to see us do it in the Zimbabwean way. So we like to do it in a native language, but explain every item and explain what we are singing about.”
The five performers on tour have graduated from Black Umfolosi’s junior program, Dube explained. The current 29-stop Canadian tour began in Nova Scotia.
More than a singing group, Black Umfolosi has a mission that includes spreading Zimbabwean culture, providing jobs for performers, and fostering social harmony among people of different backgrounds and beliefs.
Climate change is the theme of this tour, Dube revealed.
“Everybody (singers) talks about climate change and there is a special song that we start with when we open the show.
“This is the only Mother Earth that we have, so every one of us as humans we have a responsibility to save Mother Earth for the coming generations.”
Black Umfolosi, said Dube, sees itself as “a book or a newspaper … to educate people, to give them some awareness.
“In that way, people get the message easier and quicker than when you write or maybe when someone addresses them.
“When they are absorbed into a performance, then it stays for a long time in their memories.”
Concern about the deadly Ebola virus currently ravaging parts of Africa results in Black Umfolosi receiving extra scrutiny during its travels. It has not seriously inconvenienced them so far, Dube reported.
The self-taught a cappella singing and traditional dance group was formed in 1982 by schoolmates who wanted to develop themselves and contribute to their community.Advertisement

They named themselves after the Umfolozi Omnyama River in South Africa.
The Black Umfolosi Performing Arts Projects subsequently acquired land and built an arts centre.
Specializing in imbube music, gumboot dance and Zulu dance, Black Umfolosi has toured extensively nationally and internationally.
According to the Black Umfolosi website, audiences should expect “intricate rhythms, clicking and clapping … highlighted during their brilliantly choreographed shows with a full range of movements from subtle to vibrant stomping and leaping!”
This article was originally published by BC Local News