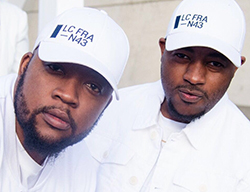 UK-BASED duo, Blackdiamond, are back and have released their highly anticipated new single Lahl’umlenze along with a swanky video.
The summer single, released mid-May was trending on social media before its scheduled release and has received rave reviews so far.
Blackdiamond, made up of brothers Steve “Pro tha God” Manjelo and Shane “Sugar Shane Wabantwana” Manjelo, first came on the scene in 2007 and cemented their success with first album Supernova which gained critical acclaim and set a new standard for Zimbabwean Hip-hop.
The Bulawayo-born boys, who had taken time out to work on their impending album, announced their comeback in April and promised there would be more to come later on in the year.
Steve said that working on Lahl’umlenze was a fantastic experience as it allowed them to produce something they had wanted to do for a long time and also piece together their album.
“Shane and I have decided to go in a different direction musically,” Steve said. “We have a new vision and sound, and the album is going to be reflecting a lot of this.
“The decision was not made lightly. We knew that we were taking a risk mixing it up and that it would come with its challenges but, we are optimistic that the long-term benefits will be rewarding for us and our fans.”
Recently, the pair have shown considerable versatility; producing music of varying genres from Trap to House Music. Their hard-hitting beats and unique wordplay have separated them musically in an industry filled with extraordinary talent.
From the producers of Gobisiqolo, Lahl’umlenze features Newcastle based DJ, Erv Madumeja.
Erv has officially joined the duo permanently and will feature on several of the songs on the album.
“Steve, Shane and l had discussed collaborating for a while and when they approached me with the idea for the single, it was an offer l could not refuse,” Erv said.
“Blackdiamond have done formidable things since they debuted. I have watched them perfect their art over the years and l am honoured to be joining them as we take our music to the next level,” Erv added.
Talking about the album, Shane said: “We are currently putting the final touches to our album and will probably release another single towards the end of the year.”Advertisement

The trio have embarked on a nationwide tour and have already performed in Birmingham and Slough. Newcastle and Scotland are also on the cards in a few weeks’ time.
They will also be supporting South African artist Professor on his UK tour in July with shows scheduled for Leceister and Manchester respectively.
Lahl’umlenze is now available from all major digital stores, including Amazon and the group say the single will be available to purchase at their upcoming gigs.
WATCH VIDEO