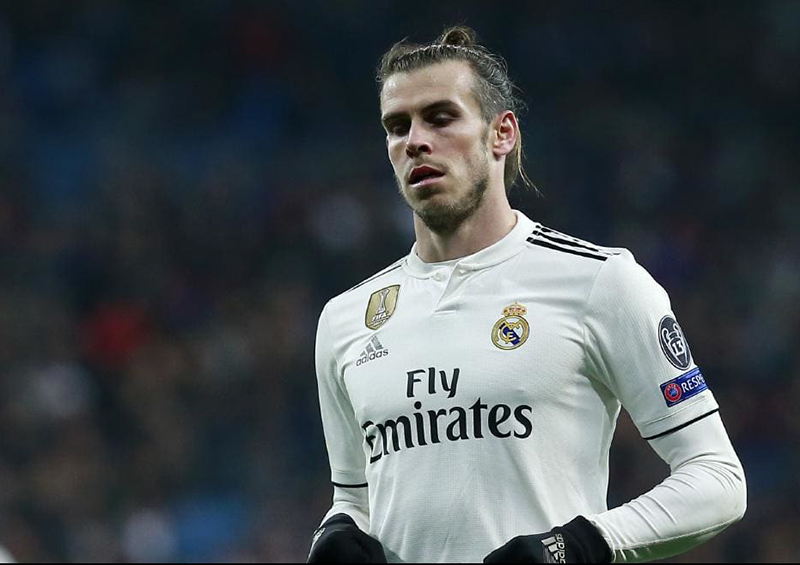 Gareth Bale came off the bench to score a controversial winning penalty against Levante on Sunday but his refusal to celebrate suggested all may not be well again at Real Madrid.

Bale’s spot-kick earned Madrid a battling and, in truth, undeserved 2-1 victory at the City of Valencia Stadium where referee Ignacio Iglesias failed to reverse his decision, despite VAR exposing a theatrical dive from Casemiro.

The absence of any delight from a stony-faced Bale was telling, as he turned and brushed off team-mates’ attempts to congratulate him.

“The players can celebrate goals how they want, as long as we win,” coach Santiago Solari said.

This was Bale’s sixth game on the bench in the eight matches since he returned from injury and it remains to be seen if his cameo will be enough to win a start against Barcelona on Wednesday, in the semi-final of the Copa del Rey.

“He looked thrilled in the dressing room because he scored,” added Solari. “I loved how he came into the game, the anger he played with helped, and he gave us the victory, he gave us hard work.

“When we had 10 men he performed a double-job up front. For me, he had a fantastic match.”

Bale replaced Karim Benzema in the 74th minute, after the Frenchman had scored his own penalty in the first half before Roger Marti pulled Levante level.

Levante had already twice hit the post by then and Madrid will be relieved to have escaped with the points that keep them nine behind Barca, and two back on Atletico, who had earlier beaten Villarreal.

Alvaro Morata scored his first Atleti goal at the Wanda Metropolitano, toasting his smart finish by poking fun at VAR, which had twice intervened to prevent him opening his account at his new club.

Real Madrid have been among the most vocal critics of the technology in La Liga this season but Levante were the ones hard done by this time.

Cheick Doucoure’s swinging right foot was wild but there was no contact to merit the leap from Casemiro. Iglesias reviewed but retained his decision.

Barcelona, whom Real now face in two Clasicos in four days, the second in the league, also at the Santiago Bernabeu, will now benefit from an extra day’s rest and also a suspension for Nacho, who was sent off late on for a second yellow card.

Levante dominated for the majority of the first half but missed three golden chances. Roger was most guilty, poking onto the post from three yards out, and then nipping in behind but again hitting the woodwork, when Thibaut Courtois had left the corner open.

In between, Madrid took the lead with a penalty that took everyone by surprise, brought back to a Luka Modric cross blocked by the raised arm of Enis Bardhi. It was the correct call and Benzema made no mistake.

Levante had been the better side and found an equaliser just before the hour, Luis Morales squaring for Roger, who beat Nacho to the ball and expertly angled a finish into the far corner.

The game was now in the balance. The lively Vinicius Junior sped in behind but was denied by the hand of Aitor Fernandez. Bale came on for Benzema and was soon called into action as Doucoure swung and missed, prompting Casemiro to tumble. Bale slid the ball into the corner.

Nacho was sent off and so was Levante’s Ruben Rochina on the bench, punished for protesting. Levante deserved more but Madrid held on.

Morata off the mark

Atletico’s victory was more comfortable as Barcelona’s closest challengers kept up the chase with a 2-0 win over Villarreal.

Since joining Atletico on loan from Chelsea last month, Morata has twice had goals ruled out on review so when this one finally stood, he celebrated by imitating a referee putting a finger to his ear.

“At last it came, and with a victory too, so I’m going home happy today,” Morata said. “Until I saw all the officials in the stadium had given the goal, I didn’t want to celebrate too much.”

Saul Niguez added a late second for Atletico, who sustain momentum after their brilliant win over Juventus on Wednesday in the Champions League.