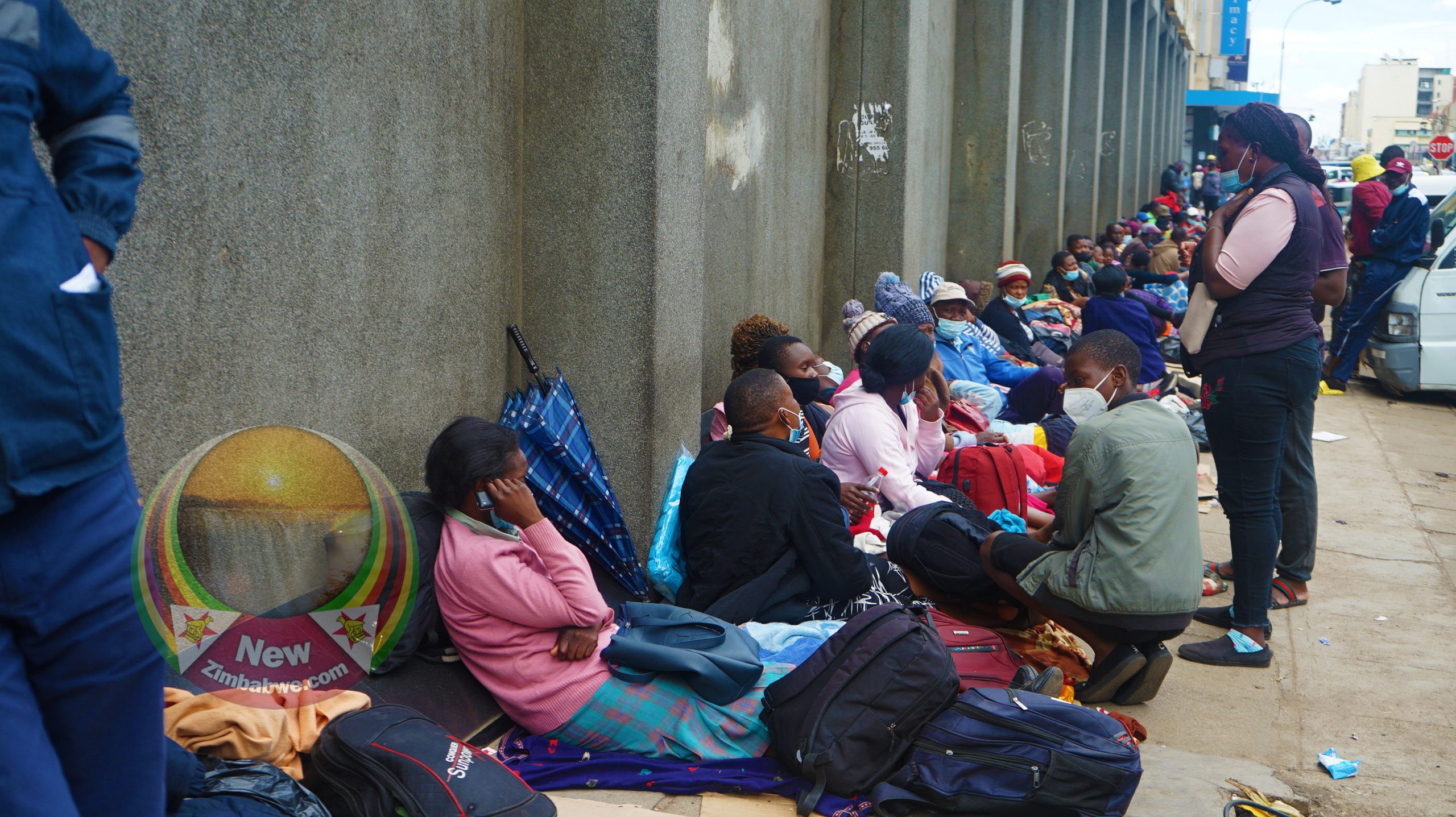 MOST Zimbabweans say they will abandon the customary countryside visits for Christmas because of a biting economic crisis underlined by cash shortages.

In many instances, people spend whole nights in queues to maximise their chances of accessing the cash.

A survey by Newzimbabwe.com on Thursday showed that many of the Bureaux de change had no money while only one was said to have picked only 200 people to get money on that day.

Over 1000 people were crowded at Karigamombe Centre, which accommodates three forex exchange facilities.

Some claimed that they had been queuing since last Thursday with no luck.

“I have been in the queue since last Thursday. The manager just told us that they have no money so we should come back tomorrow. It only means I will be sleeping in this queue again because If I leave, I will have to re-join again,” one man said.

Men and women and babies sleep in queues without any ablution facilities and in violation of Covid-19 regulations.

They have turned the parcade into their toilet and the car park is filled with a stench of human excreta.

Some citizens feel the facilities are giving money to those who operate in black market.

“Sometimes we hear that there is money, but we just wonder who really gets the money because we have been in this queue since last week. It is only two days before Christmas but our plans to celebrate or enjoy the holiday have been shattered because we have no money,” one Linos Maphosa said.

“They randomly pick people, yet we have been in queues for days, I feel that they already know these people who they handpick from queues. Maybe the central bank is giving them money, but it is them who have engaged black market money changers. We see some weird smart dressed people who walk and leave with money with no hustle at all, yet we are dirty and tattered by spending days in queues,” he added.

This was done to promote financial inclusion and access to forex for small value transactions.

But this facility which provides foreign currency to general citizens at a generous rate is being overwhelmed by clients seeking to benefit.

The majority of people who spoke to this publication said the government should change its policies.

“We are leaving work to come and queue here. How will there be production. We will be more than 1000 yet only 200 will be given money per day. The government should simply come up with a plan for the money to be deposited into our bank accounts and we withdraw straight from our accounts. This will end this crisis because 90 percent of us get our salaries from the banks,” said Maphosa.

“People are fighting in queues; thieves have also found a hunting ground because of this havoc they have created. Instead of depositing my money into these facilities they should simply give it to my bank since my bank can simply get money from the RBZ. It lessens the burden,” another man said.

In terms of the MPC’s resolutions, members of the public can buy the forex, from bureaux de change, at the official RBZ ruling auction exchange rate ($120 this week) plus a commission of just 10 percent, which is significantly lower price than the black-market rate of around $230 to the greenback.

The intervention by the RBZ and its MPC comes on the backdrop of a widening gap between the official exchange and black-market foreign exchange rates, making it difficult for ordinary citizens to afford small value transactions that require hard currency.

Economic analysts say during this season, the demand for cash is usually high hence the long queues.