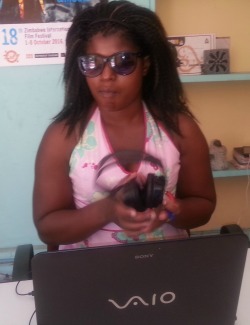 BLIND actress Edith Masango, 24, said one of the saddest things she has heard was people commending her for a job well done in a film in which she acted but may never be able to watch.
Masango starred in a short film The Colour of Blood as ‘Jane’ which was featured at the just ended Zimbabwe International Film Festival (ZIFF).
In an interview with Newzimbabwe, she said she drew comfort from hearing words and sound effects when the film is showing.
Masango defied all odds with the help of her siblings to master and learn script lines by head.
“They (scripts) were not written in Braille; so I had to make my brothers read the lines for me and I had to memorise all off them,” she said.
The story of her life is also stuff for movies.
Edith was not born blind but lost her sight at the age of 20 when she gave birth to her first born child; she was diagnosed with retinis pigmentosa.
“My ex-husband left me and said he can’t live with a blind woman; he has never seen the face of his four year old boy child and has never bothered to come back. The same with me; I don’t know how my child looks likes,” she said.
“For me, that was the end of the world but my mummy took me to her rural home where I got counselling from my grandmother who is also blind; the condition is hereditary.”
Edith said from there she was sent to a rehabilitation centre in Harare where she met her classmates who had far worse conditions than hers.
“That was my turning point and I saw a brighter future ahead of me,” she said.
But how did she end up as an actor?
“I once told my friends, jokingly, when we met a private radio station that I would want to act in drama, theatre or film and I didn’t know that they took that seriously.
“One day, my mother read a text message for me saying I should come and teach someone how to act as a blind person, but instead the director Justice Chapwanya- Mukoena offered me the role and the rest is history,” said Edith.
Her message to other handicapped people?
“Defy the odds; you are just as good as anyone, but you have an extra gift to see beyond a sighted person and we should not be limited in any field.”
For Edith, the sky is the limit. She says she sees herself going far and wishes she could take part in acting roles that send a message about her community.Advertisement

Lucky for her, she is now employed as a receptionist at Nigel Munyati’s ZIFF Trust offices as she is a trained secretary.