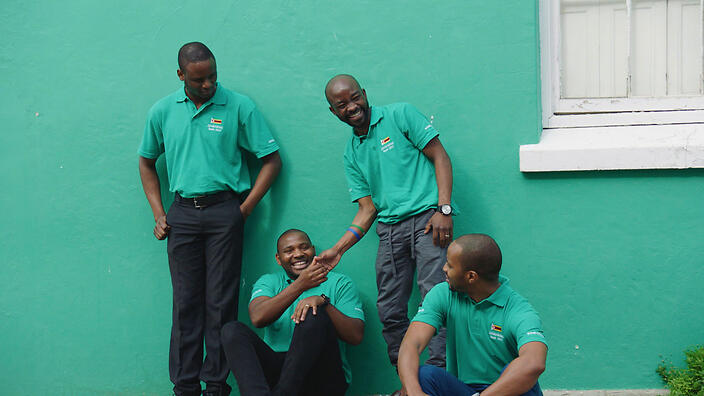 You wouldn’t expect an award-winning sommelier to say this about their first taste of wine. But Joseph Dhafana still remembers the bitter, acidic burn of his initial sip – he was in his twenties and not a fan.

At age 23, Tinashe Nyamudoka thought his introduction to red wine was deeply unpleasant, too.

“It was like biting into a green stalk,” he says, of its tart, “chewy” taste. “The first few sips weren’t so memorable or lovely.”

Some bottles of gamay, nebbiolo, shiraz and chenin blanc later, they became converts. In fact, the respected sommeliers ended up as Zimbabwe’s first-ever representatives in the World Wine Tasting Championship in 2017.

Their fellow teammates had unlikely starts to their wine careers, too. Sommelier Pardon Taguzu was shaken by his first drink. “I got sick for two days,” he says in Blind Ambition, the award-winning Australian documentary that follows their momentous journey to the global competition in Burgundy, France.

Marlvin Gwese, their other teammate, was a member of the Pentecostal church when he was growing up – and his religion did not allow the consumption of alcohol (although he wondered if Jesus’s first miracle of changing water into wine might leave some room for a loophole).

Although they’re now established in the glamorous world of wine, what makes their successful careers even more incredible is that – just over a decade ago – they were refugees searching for a second chance at life.

The men are originally from Zimbabwe, but as conditions in the country deteriorated in 2008 – with prices doubling every 24 hours due to the government’s economic mismanagement – a monthly wage wouldn’t even cover your bus fare. Close to half of the country suffered from chronic malnutrition. “There was nothing: no food on the shelves, no cash in the ATMs, it was so hard to just get food,” Dhafana says.

He decided to flee instead of starve – choosing not to tell his mother as he left, because he didn’t want to distress her. “She was going to say: ‘no, you can’t go, because you’re going to die.’”

His mother wasn’t wrong about the dangers of leaving: many people died crossing the border. You could be shot by police or soldiers, or get attacked by crocodiles along the risky route.

He paid people smugglers to transport him and his wife Amelia out of Zimbabwe: they were locked in an airless railway container that started to ‘cook’ its passengers in the extreme heat, with people passing out from the unrelenting temperatures.

“Luckily we made it into South Africa,” he says in Blind Ambition, “but we almost died.” Nyamudoka, who fled before Dhafana, assumed his relocation would be temporary – perhaps he’d return after watching the final World Cup match in December 2008. “We realised that it was not getting better and that we had to make a life here,” he says. That was 14 years ago.

Being a refugee in South Africa was tough: Zimbabweans endured muggings, violent xenophobic attacks and other challenges. One man who came to their aid was Bishop Paul Verryn from the Central Methodist Mission church in Johannesburg: he gave them shelter and never turned anyone away, ultimately helping 30,000 refugees during his time there.

“That man saved our lives,” Dhafana says in the documentary. “There are so many people who helped me… I owe so much to the world.”

“Luckily we made it into South Africa, but we almost died.”

He’s especially thankful for Mynhardt Joubert, who offered Dhafana work as a vegetable gardener at his Bar Bar Black Sheep restaurant in 2009. His boss also poured him a sparkling wine on his 25th birthday – and the fizzy bubbles gave Dhafana a lifelong buzz for fermented grapes. (In fact, the cellar that made that momentous drink is the same one that produces Dhafana’s own wine today.)

As the four refugees became sommeliers at Cape Town’s top restaurants, writer Erica Platter turned the spotlight in their direction, profiling them on the website of acclaimed wine critic Jancis Robinson in 2016. When Robinson learnt about their dream of representing Zimbabwe at the World Wine Tasting Championship the following year, she launched a fundraising campaign for them. “Every day, we were looking at the money going up and up,” says Nyamudoka, who noticed employees and friends cheerfully chipping in. “It was an amazing feeling.” The campaign overshot its £6,500 goal, drawing support from people in The Netherlands, Switzerland, the US and other corners of the world. And that’s when Blind Ambition’s filmmakers, Warwick Ross and Robert Coe, first heard about the story in Sydney. After chatting to the four sommeliers on Skype (who turned out to be fans of the duo’s previous wine documentary, Red Obsession), Ross and Coe flew to Cape Town just weeks later to shoot Blind Ambition – despite having no financial backers for their movie and having to initially pay for the film themselves. “They were in training already for the championship and we didn’t have a lot of time to waste,” says Ross.

The sommeliers faced a lot of obstacles ahead of the competition. Firstly, they couldn’t access the kinds of wines that someone in, say, London or New York could. Also, they had a modest budget to buy bottles to train with: the men needed to taste a deep range of vintages, grape varieties, regions and producers in order to accurately guess which wines would be poured in the blind-tasting competition.

“Winemakers in South Africa in Cape Town who knew their story… were good enough to open their cellars a bit and help them out,” says Ross. Other people also kindly donated wines or offered them samples.

When Team Zimbabwe landed in Europe, just days ahead of the competition, the sommeliers went on a tasting spree across Champagne, Rheingau and other wine regions. “Here were these chateau owners, opening up their cellars, letting them taste rieslings going back to 1958,” says Ross. Because they could only afford to be in Europe for a few days, they were sampling wines at every spare moment – even at 3am in the car. “The guys were drinking in the car, tasting in the car, cutting open plastic water bottles and using them as spittoons,” says Ross. At the contest, 12 wines are poured. Entrants guess the grape variety, country, wine region and vintage of each drop and earn points for correct answers.
Source: Blind Ambition

Another challenge the sommeliers endured? Books about wine traditionally describe flavour in European terms: blackberries, strawberries and other fruits that are unfamiliar to the Zimbabweans.

“It was quite difficult associating [wine with] these blackcurrants, cassis, cherries – even up to now, I’ve never seen a blackcurrant actually,” says Nyamudoka. “I grew up eating mazhanje, matamba, matunduru, zhanje and masau.”

A wine-tasting competition in Burgundy – as international as it is – could easily disadvantage someone who grew up with a palate shaped by wild Zimbabwean fruit like creamy, custardy maroro, rather than European redcurrants. But the sommelier ultimately viewed his African flavour vocabulary as an asset: “It made me enjoy wine more, because I was speaking it in a language I was used to and I had brothers who shared the same experience with me.”

“It was quite difficult associating [wine with] these blackcurrants, cassis, cherries – even up to now, I’ve never seen a blackcurrant actually. I grew up eating mazhanje, matamba, matunduru, zhanje and masau.”

Another roadblock Team Zimbabwe faced: some of the wines poured in the competition were truly obscure. It’s tough to accurately predict that you’re drinking chasselas when the Swiss white wine doesn’t have a distinct flavour and is near impossible to source outside of the country (only two per cent of Switzerland’s wine is sent overseas).

“You have European grapes grown in New World regions, and how are these guys [to] have ever tasted those?” says Ross. “One of the wines at the competition was a Mexican nebbiolo – I don’t think anyone got that combination right.”

In Blind Ambition, Nyamudoka questions the obsession with where wines are from, and suggests the focus should be where the wine is taking you. “And he combines that with a sense of kumusha, a Shona word which means your ancestral place, your home – not necessarily a physical place,” says Coe.

The sommelier actually named his business Kumusha, and hopes to harvest grapes from his grandfather’s Zimbabwean farm to make wine one day. Maintaining your family’s roots is especially powerful when you’ve had to flee your homeland. The team with Jean Vincent Ridon, who coached the sommeliers during their early days.

In fact, the movie’s welcome emphasis on generosity, resilience and inclusion might be why it won audience awards at both Tribeca and Sydney’s film festivals. Blind Ambition has been sold to Japan, US, UK, Scandinavia, Germany and many other countries, too, and the documentary never forgets that it is ultimately a refugee narrative.

“Four of us are just fortunate that we got to tell our stories,” says Nyamudoka. “This story is [there are] millions of people around the world who have gone through it. It’s not our story, it’s the story of human beings, it’s the story of persistence. We were just the fortunate ones – our faces are shown and we get to tell the story, but I believe it’s a story of many who have been through what we have been through.”

Blind Ambition is in cinemas from 3 March.