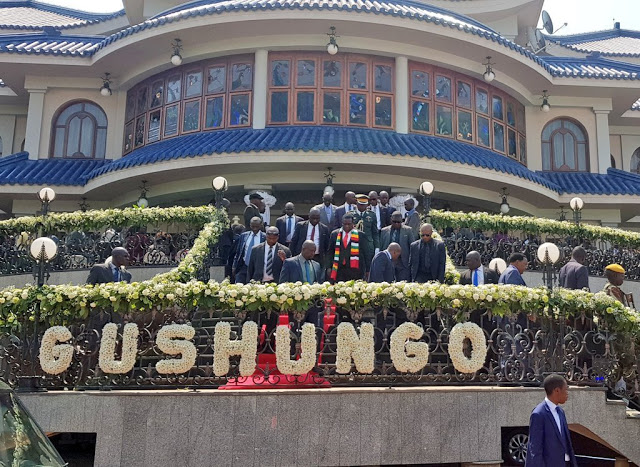 LATE former President Robert Mugabe and his wife, Grace are not the real owners of the imposing Blue Roof mansion in Harare’s upmarket Borrowdale suburb, it has emerged.

The structure, a family spokesperson has revealed, in fact belonged to Zanu PF, a party Mugabe led since the period leading up to the country’s independence in 1980.

President Emmerson Mnangagwa, Mugabe said, was now working on modalities to transfer ownership of the two properties to the Mugabe family.

“The issue of properties is being handled by the President. He is handling the issue to ensure the family is safe,” said Leo Mugabe while addressing journalists during his uncle’s funeral wake in Zvimba, Mugabe’s rural home, Sunday.

“I was told by President Mnangagwa that the party will help to transfer the title deeds of the properties to the former President’s family. I do not want to jeopardise the process.”

Mugabe said Zanu PF owned the land on which the two houses were constructed.

“It’s so funny. The party (Zanu PF) is the one that bought the first house in Mt Pleasant and the land for the Blue Roof property. It leaves the former President Mugabe without a house in Harare,” he said.

Zanu PF secretary for Administration Obert Mpofu confirmed the party was in the process of transferring title of the properties.

“The process is currently underway to transfer them to the (Mugabe) family,” said Mpofu.

This comes after Mnangagwa, who overthrew his former boss in a military assisted coup in 2017, has pledged his continued support for Mugabe’s widow.

Mnangagwa is keen on appeasing the spirits of a man he betrayed when he threw him out of his job in a shock turn to the country’s political situation.

During his tenure, Mugabe came under fire for allegedly spending millions in tax payers’ money to build himself an expensive home after his government embarked on a policy to destroy ordinary Zimbabweans’ homes under the infamous Operation Murambatsvina back in 2005.

The astounding revelations around one of Harare’s most magnificent residential structures could rank as one of the most closely guarded secrets around the former First Family’s properties.