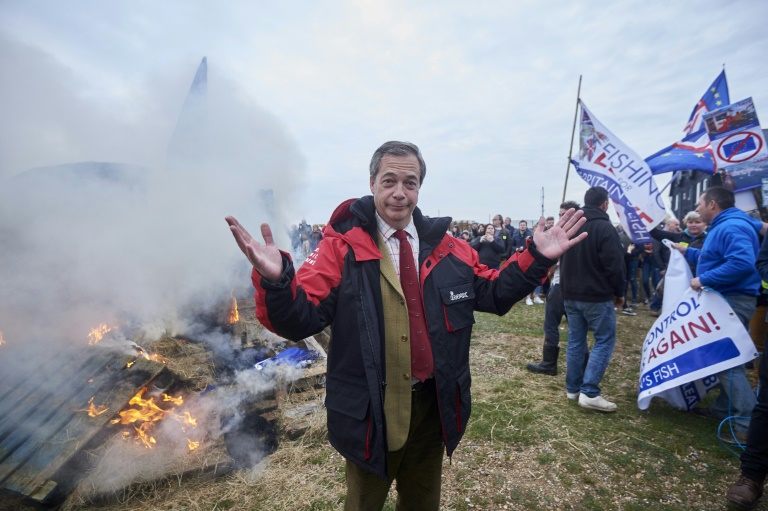 “Burn the flag!” chanted the crowd in a British fishing port on Sunday, as a boat adorned with the EU flag was set on fire in one of a series of Brexit rallies held around Britain.

Leading Brexit campaigner Nigel Farage looked on as the flames leapt into the sky in Whitstable, south-east England, where protesters set off orange flares and blew horns.

“We’re not actually in control of our own territorial waters,” said Farage, a lawmaker in the European Parliament.

“We’re catching far less than half the fish that the British fleet should be, and we’re operating under a crack-pot set of regulations that could have only been designed by bureaucrats in Brussels,” he said.

Touring the port aboard a fishing boat and waving to supporters, Farage said the British government had been “really weak-kneed” over fishing policy.

While Brexit negotiations are ongoing, London and Brussels have agreed to a transition period after Britain formally leaves the bloc in March 2019, which will run until December 2020 and during which much of the relationship will remain the same.

Many British fishermen feel betrayed by this arrangement, arguing that they had been promised more fishing rights.

The former UK Independence Party leader had vocal support among those aboard the fishing vessels, although the crowd of a couple of hundred people gathered on the shore included many carrying pro-EU, anti-Farage signs and with the bloc’s flag draped around their shoulders.

Dismissing them as “cretins”, Farage said his suited security guard was necessary to avoid the “violent, pro-EU leftists” who are “not interested in democracy”.

“I feel sorry for a lot of the fishermen, they’re being manipulated,” he said, arguing that the EU could not be blamed for the decline in the British fishing industry.

“A motley collection of little boats, there’s a complete failure to invest,” he said from the shore.

One of the protest organisers, Aaron Brown, said he was worried that the transition period could threaten his livelihood as Britain will no longer have a say in EU rules.

“Within that 21 months, we have to abide by all the EU law but after Brexit the EU could cull what’s left of our fleet. They can do that by enforcing detrimental legislation to see us off, and then that would allow them to claim the resources,” he said.

One woman, who did not give her name because she was concerned others would be prejudiced against her, said the fishing industry would be hit hard by Brexit.

“It’s a tragedy that fishermen have been led to believe this, because they are going to find themselves in an appalling position when they realise that Britain has left… and they won’t get their rights back,” she said.

Despite their concerns for the future, the protesters were confident as they posed with Farage moments before the wooden boat was set on fire.

“Traitors!” shouted one woman as arguments broke out with the pro-EU crowd, while a little girl joined in with a cry of “burn it!”

Caroline Fischer, 29, who wore a “Bollocks to Brexit” sticker on her top, was visiting from London and admitted she struggled to find anyone in her “pro-Europe enclave” who voted for Brexit.

“You come down here and it is different, it’s good to hear different viewpoints,” she said.

But she thought Brexiteers’ anger was misplaced.