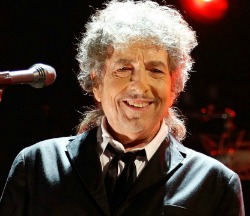 BOB DYLAN has accepted his Nobel Prize for literature, more than three months after the awards ceremony, Swedish media report.
He received his medal at a private event in Stockholm before a scheduled concert in the city.
No further details were given.
Swedish Academy officials previously said Dylan would not deliver his Nobel lecture, a traditional condition of receiving the 8m krona ($900,000, £727,000) prize money, at the event.
He is expected to deliver a taped version of the lecture later.
If he does not deliver a lecture by June, he will have to forfeit the prize money.
A member of the Swedish Academy, which awards the prize, told the Associated Press news agency “it went very well indeed”, and that 75-year-old Dylan was “a very nice, kind man”.
In an earlier blog post, the academy’s secretary said the setting would be “small and intimate”. No media were present at Dylan’s request.
After receiving the prize, Dylan performed a concert on Saturday evening at the Stockholm Waterfront venue. A second concert is planned for Sunday evening.
The Nobel Prize for literature has usually been associated with poets and novelists.
But the academy handed Dylan the prize “for having created new poetic expressions within the great American song tradition”.
Dylan failed to attend the December ceremony, citing previous commitments. In a speech read on his behalf, he said it was “truly beyond words” and he thought his odds of winning were as likely “standing on the moon”.
Advertisement