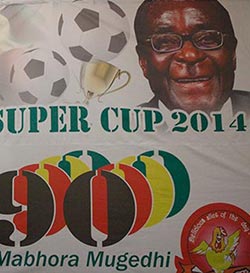 THE much anticipated Dynamos-Highlanders Bob90 Super Cup final clash originally slated for this coming Sunday has been postponed indefinitely.
The postponement comes amid a ticketing scam that saw 2009 Cosafa Castle Cup tickets being issued in last Sunday’s elimination match between Highlanders and Harare City at Barbourfields Stadium.
Highlanders won 1-0 to set up a dream date with holders Dynamos in a repeat of last year’s final.
Controversy also surrounding the tournament is the disappearance of US$9000 from last year from the turnstiles with the matter yet to be resolved.
It was however the use of Cosafa tickets last Sunday that has brewed all the storm amid suspicion of fresh money foul play.
Heightening suspicion is the fact that chairman of the tournament’s organising committee, Stanley Kasukuwere has distanced his team from the issuance of the apparently stale Cosafa tickets, professing ignorance on how that came about.
Instead, he pointed fingers at Highlanders as having handled the ticketing as the hosts on the afternoon but the Bulawayo giants have dismissed the claims.
“No one from Highlanders was ever responsible with the gate takings,” said Highlanders treasurer Jerry Sibanda.
However, the Bob90 tournament spokesperson Charles Mabika said: “We will announce in due course the new date for the final. But we can assure fans that the game is still on and there is no reason to worry.”
Dynamos would be looking to defend the Cup after dismissing rivals Highlanders last season’s tournament.Advertisement