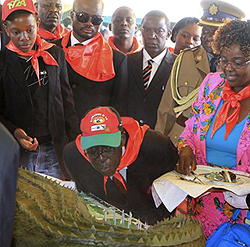 MUTARE: The 21st February beauty pageant which was held in the eastern border city Friday night flopped after locals either stayed home or went about their usual business.
The event was part of President Mugabe’s 92nd birthday celebrations. Held at the Mutare Hall, the pageant was organised by A1 Modelling Agency and Zanu PF Manicaland Provincial Youth League.
The hall was virtually empty with no sign of people coming save for the organisers, models, DJs and a handful of Zanu PF youths.
When NewZimbababwe.com visited the venue, a handful of youths were seen milling outside drinking some whisky and cheap Mozambican beer while the DJs played some music.
Even students from local colleges, universities and schools snubbed the occasion choosing to focus on other issues.
Youths interviewed by NewZimbabwe.com said they had better problems to attend to than be part of the pageant.
“We are not employed and where do we get the money to spend on the peagant? The party should create employment instead of forcing us to be part of the 21st February Movement. That is mediocrity of the highest order,” said Richard Mawoyo, 25, of Zimunya.
Mawoyo said, in his view, the event was a money spinning project for some party officials who wanted to take advantage of Mugabe’s birthday.
A local political observer, Clide Rupiya, said youths and members of the local community no longer want to be associated with Zanu PF issues because they have suffered enough.
“We can’t expect the community to continue supporting such events when they are actually living in abject poverty. People want food on their tables,” said Rupiya.
Meanwhile, even the traditional 21st February supplement traditionally run by a local state-owned Manica Post newspaper flopped after few remaining companies in the area could not be persuaded to advertise.
A bulk of congratulatory messages were from government primary and secondary schools which have no choice. The Asian community which traditionally supports the event also did not feature in the supplement this time around.
One Asian businessman who usually supports the event said “the economy was not allowing”.
“Please don’t quote my name but generally the economy is not allowing us to splash money on adverts. We would rather pay our workers. Things are tight my brother,” he said.Advertisement