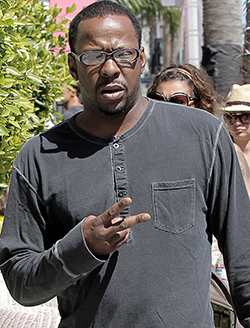 BOBBY Brown has asked for privacy after his daughter with the late Whitney Houston was found unresponsive in her bathtub at home.
“Please allow for my family to deal with this matter and give my daughter the love and support she needs at this time,” the R&B singer said in a statement.
A spokesman for the family confirmed that Bobbi Kristina Brown was recovering in a hospital in Atlanta and that her father was by her bedside, but said “no additional information will be forthcoming”.
Kristina was found unconscious in the bath at her home in Roswell, Georgia, on Saturday morning by her husband Nick Gordon and a friend.
The 21-year-old was rushed to North Fulton Hospital where she was revived and “breathing”, said Roswell police spokeswoman Lisa Holland.
Unconfirmed media reports said doctors had put her in a medically induced coma, but the hospital has not given any updates on her condition.
The scare comes nearly three years after Grammy Award-winning singer Houston drowned in a bathtub in Beverly Hills, California, in February 2012.
After her mother’s death, Kristina received hospital treatment twice for anxiety.
Her cousin Jerod Brown told Sky News on Saturday: “Of course she goes through the grieving because it’s still fresh, but other than that she’s doing fine.”
“We’re just praying for a speedy recovery, that’s it,” he added.
Both of Bobbi Kristina’s parents struggled with substance abuse, and Houston described their 15-year marriage, which ended in 2007, as drug and alcohol-fuelled.
Brown was sentenced to 55 days in jail in 2013 after admitting to driving drunk in 2012.
Meanwhile, celebrities and musicians have been offering their support and prayers for Ms Brown.
La Toya Jackson tweeted: “Let’s All Send Love Light & Prayers to Bobbi Kristina Brown! Wishing Her A Healthy & Speedy Recovery!”
Missy Elliott also wrote on Twitter: “Still Praying 4 Bobbi Kristina.”Advertisement