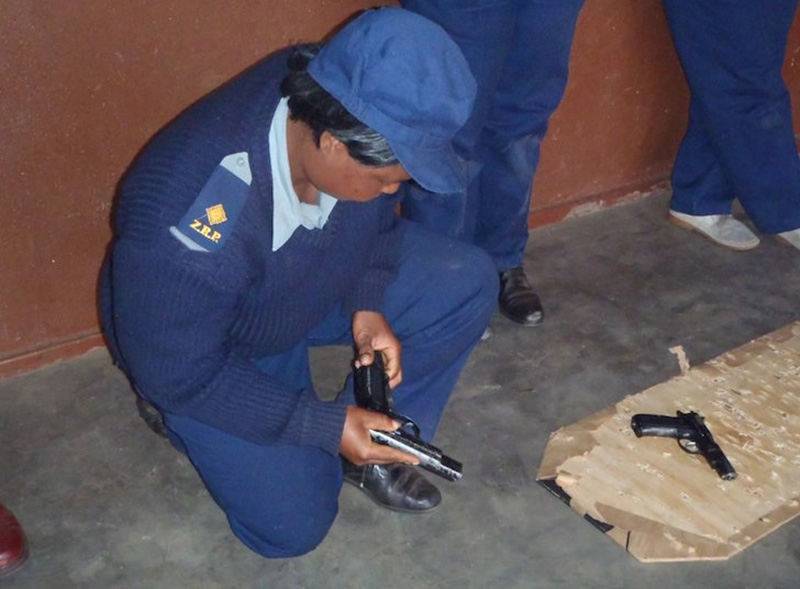 POLICE are hunting for 14 armed robbers who masqueraded as police officers and soldiers last month before robbing unsuspecting victims.

Only one of the daring culprits Tinaye Rice (35) has been arrested on allegations of stealing valuables worth over $50 000.

The notorious gang also allegedly robbed police officers of their service pistols and cell phones before stripping them naked when the latter had responded to a robbery complaint.

Only rice was arrested after he was shot in the leg by the police during apprehension.

He appeared before Harare magistrate Rumbidzai Mugwagwa Friday facing 15 counts of armed robbery and was remanded on his hospital bed to February 15.

According to prosecutors, on January 18 at around 9:30 pm, Rice and his 14 accomplices who are still at large, approached Li Jiping and Lieu Hia Ling who were at their home in Alexandra Street, Chegutu.

They were allegedly armed with rifles, pistols, machetes, iron bars and baton sticks while clad in army and police uniforms.

It is the State’s case that they indiscriminately fired shots and robbed the duo of a Toyota Hilux, a mill starter, clothes, a pistol and cash.

The state also says they robbed one Farisai Chihoro who resided at the cottage of the Chinese couple.

Court heard the gang also shot Obert Kaviyano who used another cottage at the residence, once on the upper left arm before robbing him of a DSTV decoder and cash amounting to $40.

On the same day, they also robbed Bruno Damiliano of a Peugot 406 and a cell phone.

It is alleged they kidnapped all their victims and dumped them at City Bakery in Chegutu.

According to court papers, Rice and his accomplices went back to Jiping’s house, pounced on police officers who were attending the armed robbery scene.

They allegedly stripped naked Givemore Chirisa, Simba Katerere and Precious Mahara and robbed them of their riot gear and service pistol before dumping them at the same bakery.

Court further heard that during the same night, Rice and his accomplices intercepted Paul Mutipforo, a police officer who was driving a Mazda B2200 police vehicle, registration number ZRP 482 along Cattle Trail Road and was in the company of a colleague, Andrew Mukondombera.

The police officers were attending to a robbery scene that had allegedly been committed by the same gang in Alexandra Street.

The robbers, who were still clad in army and police uniforms, fired at the police officers, deflating the tyres of the police car in the process.

They allegedly robbed the police of their identity cards, cash before relieving Mukondombera of his service pistol loaded with ten rounds in its magazine.

Using the same modus operandi, court heard that the 15 suspects pounced on three security guards who were on duty at the Chegutu Municipality’s Engineering Department and robbed them of cell phones, wallets, clothing, including undergarments and left them naked.

Rice was arrested in Harare on January 31 after being found in possession of the stolen FN rifle, a Norinco pistol, car keys for the Audi they abandoned in Chinhoyi after it developed a mechanical fault.