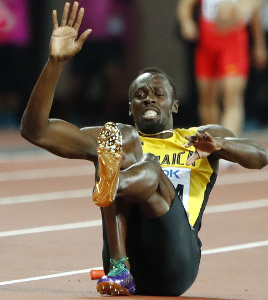 LONDON: Athletics legends Usain Bolt and Mo Farah experienced some of their greatest moments in their careers at the 2012 Olympics in London but five years on and back in the same stadium, misery replaced joy on Saturday.
Bolt, who won the individual 100 and 200m and the 4x100m relay in London in 2012, collapsed to the track injured anchoring the Jamaica 4×100 metres relay team.
Jamaican team doctor Dr Kevin Jones said Bolt had suffered from “cramp in his left hamstring”.
“But a lot of pain is from disappointment from losing the race,” Jones said.
“The last three weeks have been hard for him, you know. We hope for the best for him.”
The organisers brought on a wheelchair but Bolt shrugged them aside and he limped across the line, grimacing.
Jamaica’s 110m hurdles champion Omar McLeod and relay teammate said nothing had changed with regard to the reputation of Bolt.
“Usain Bolt’s name will always live on,” he said.
Briton Farah, who had won the first of his four global double doubles of 5 000m and 10 000m to deafening cheers in London in 2012, put up a spirited and courageous effort but for the first time in six years of global championship competition he had to settle for silver behind Muktar Edris of Ethiopia.
Farah, who started the championships in grand style by winning the 10,000m, had been left by Edris as the bell went and as hard as he tried he just didn’t quite have the legs to pass his younger rival in the finishing straight.
“It’s been amazing. It’s been a long journey but it’s been incredible,” said Farah who was embraced by his fans as he made his way around the stadium on a lap of honour, stopping to sign autographs and pose for ‘selfies’.
“It doesn’t quite sink in until you compete here and cross the line -– I had a couple of minutes to myself -– that this is it.”
The despair and disappointment of Bolt and Farah was in stark contrast to another hero from 2012 — Australia’s 100m hurdling great Sally Pearson.
The 30-year-old’s grit and determination to come back from two years of injury hell — she feared that she would have to have her hand amputated when she suffered a bone explosion in her wrist in 2015 — was rewarded with her second world title.
The Australian celebrated in exuberant style, her mouth spread in a broad grin as she charged to the stands.Advertisement

She tried to find her English mother Anne McLellan — who had taken two jobs when she was raising her daughter as a single parent so she could go to training and achieve her dream — and husband, childhood sweetheart Kieran, but without success.
“Far out, that was bloody hard,” gasped Pearson.
“It’s been a long journey back from injury, but to get this moment and go and celebrate in front of my family is unreal.”
Bolt’s dramatic failure to medal permitted American great Allyson Felix to sit on top of the overall career world medals table with 15 after she was part of the women’s 4x100m relay gold-winning team.
The Americans had to fight hard to edge out the British team but in Bolt’s relay it was the reverse as the host nation pulled off an impressive but shock win over the United States — for whom 100m world champion two-time drugs cheat Justin Gatlin was booed by large sections of the stadium as he had been in the 100m even after he won the gold.
Elsewhere there was a gold for Russian Maria Lasitskene, competing as a neutral, who defended the women’s high jump title and extended her winning streak to 25.
It was the first gold for Russian athletes competing at the championships but whose federation are still banned due to the doping scandal that affected all sports in the country.