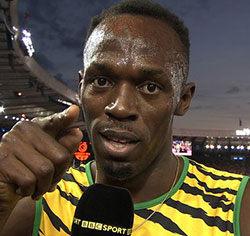 A misty-eyed Usain Bolt sat in a cramped, poorly ventilated room in Johannesburg this week and battled to hold back the tears as a recap of his career played on a screen in front of journalists.
Rare clips from his childhood races were included in the video, transporting the now-retired track giant back to a time that seems like yesterday, but also sometimes like a lifetime ago.
So much has happened between the beginning and the end. The end is something the Jamaican superstar is still trying to come to terms with but it hasn’t been easy. The Usain Bolt Show has evolved courtesy of the PR machine behind the Big Guy, now consisting of appearances at Puma-sponsored events and club gigs. There has been little time for reflection. No down time. And now Bolt has set his sights on an extension of his career as a professional athlete with an upcoming football trial with Borussia Dortmund set for March.
This week it was apparent that the former sprinter is energised by the spotlight. Bolt was in the country as the headline celebrity guest at the glamorous Sunmet in Cape Town and he hit the clubs hard, posing for pictures and dancing with fans into the early hours before playing football with the Puma-sponsored Mamelodi Sundowns on Monday and then travelling to the main event – an appearance as the Principle of the Puma School of Speed event in Ruimsig.Advertisement

Bolt arrived at the track low on energy and possibly still hungover from partying in Cape Town before running through a training session under Pitso Mosimane and Co at Chloorkop. A dreary press conference was probably the last thing he wanted to suffer through but the video review of his career caught him off guard.
“I get goosebumps when I relive those moments – especially the early races because I ran those races back home in front of my own people in Jamaica. It was a special time for me.”
Questions about how he stayed focused, what inspired him and how much work he put in all received similar responses so the message was clear – you have to want it more than anyone else, you have to set goals, be confident and most of all, trust and listen to your team.
Looking back it was a case of the stars aligning: his big personality, raw talent, hunger and drive coupled with the skill of coach Glen Mills, and cunning of agent Ricky Simms that turned Bolt into the Chief Entertainment Officer of athletics. A clean athlete – one of the most tested of his time – a beacon for a sport dogged by doping scandals. He carried the sport with his stunning performances on the track, but his Larger Than Life personality charmed fans from the time he made his debut to his last race as he cramped up ended up on his back.
Bolt pushed his career a year too far but he’s not ready to let go yet as he seems determined to attempt a career in football. He’s Usain Bolt so a few will indulge him but he’s 31 and his body has been through a lot. Football clubs will have to weigh the pros and cons of a gimmick signing but it will be nothing more.
“It’s something I really want to do,” Bolt said seriously in the press conference. “I am preparing for my trial at Borussia Dortmund in March and then we have to decide if it’s something we want to pursue.”
There were no further questions about football. The idea just seemed ridiculous.
Puma have extended his deal to 2025 so they’ll keep him busy but the Jamaican may have to be content with celebrity appearances.
After sitting through the press conference this week, Bolt stepped onto the track in Ruimsig to interact with the kids and he was in his element. He pulled out the famous pose, he was on the mic giving advice to youngsters, he ran up and down the track giving out t-shirts, signing autographs and posing for selfies. He was more energised than he’d been all weekend, a familiar feeling in a familiar setting. Back on the track.
A question about his top five sprinters of all time produced a glint in his eye: “Michael Johnson, Maurice Greene, Asafa Powell and Don Quarrie. That’s four plus me – at the top,” he said to roars of laughter.
Secure at the top of his own (and everyone else’s) top five, set up for life after years of raking in more cash than any track athlete ever has in the history of the sport, one of the most decorated track athletes of all time and still a major drawcard wherever he travels in the world… It’s hard to understand why he needs more.