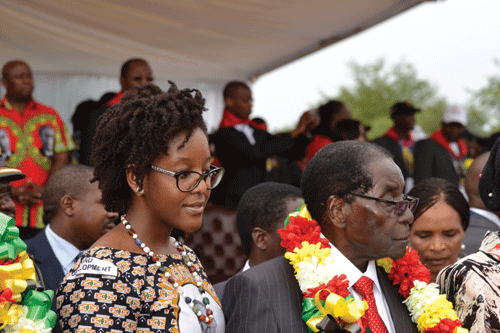 THREE armed robbers who terrorised a police officer guarding Bona Mugabe’s mansion before looting building material in December last year have each been jailed for 30 months.

The trio had pleaded guilty to robbery charges saying poverty prompted them to commit the offence. They told court that they raided the property in order to fend for their families.

Prosecutor Constance Ngombengombe urged the magistrate to give the trio a custodial sentence, saying they should have thought about the family of the complainant before committing the offence.

She said they although they were first offenders, they started at the “deepest end of misconduct” and, as such, the fact they are first-time lawbreakers falls away as mitigation.

According to the state, on December 31 at around 0100 hours, Kandenga and his gang went to 154 Lunar Road, Umwinsdale in Harare and found a security guard manning the prroperty which is under construction.

The trio pretended to be looking for directions to a certain destination and the security staffer got out of the guardroom to assist.

Kandenga then disarmed the guard of his AK 47 rifle before his team began assaulting him with iron bars and booted feet.

One of the robbers picked a wire at the site and used it to tie the guard’s hands and legs before they searched him and took identification particulars, $15 in cash, two mobile phones and 80 wooden construction boards.

The gang guarded the complainant while sourcing for transport to ferry the boards from the site.

After a while, one Shadreck Chivambe arrived at the scene driving a truck he had been hired to carry the stolen goods. The n property was loaded into the truck and the gang sped away the scene.

Court heard that the wooden boards were delivered at Siyaso in Mbare and only one was later recovered.

It was positively identified by Howard Karima of Hualong Construction Company because of its uniqueness since it was imported.