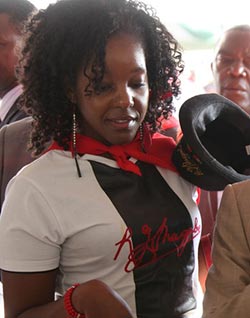 PRESIDENT Robert Mugabe’s son in law Simba Chikore will host a bachelor’s party at a five star hotel in Harare on Wednesday.
Simba, who completed traditional married formalities with President Mugabe’s daughter Bona last year, will have Zaoga founder Ezekiel Guti gracing the occasion. Chikore fellowships at Zaoga.
UFIC founder Emmanuel Makandiwa and Spirit Embassy Uebert Angel are also expected be among the guest who will usher him into fatherhood.
Chikore is a pilot with the Middle East based Qatar Airways and about 72 international guests are expected for the party from the region.
There will be tight security at the party with a guest list being referred to for everyone entering.
On his birthday on 21 February, President Mugabe said he was happy man to watch his daughter, Bona, wed, a feat he never dreamt of witnessing in his lifetime.
“We are really happy as a family, she has made us proud, you know,” said the veteran leader.
“Considering that I married … my second marriage when I was in the seventies, I had no hope that I will see my children grow old like this.
“As a family, when you have a child in the family, you will be afraid whether she will succeed or not, you will be taking care from childhood, going to school and now old enough to start a family,” he said.
Of the his three children Mugabe said, Bona, was more focused and determined in whatever she does and is now a holder of a Master’s Degree in Accounting from a Singapore University.
Bona, 24, is expected to tie the knot with pilot Simba Chikore on March 1, 2013 at Mugabe’s plush home in Borrowdale Brooke with several dignitaries expected to attend.
A massive marquee tent has already been pitched at Mugabe’s home ahead of the event which is expected to be attended by around 5 000 guests, among them “most African Heads of State and leaders.
Advertisement