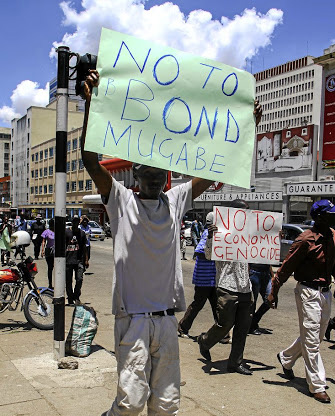 HARARE: Back in May, Reserve Bank of Zimbabwe  (RBZ) governor John Mangudya announced plans to introduce Bond notes as a measure to ease an acute banknote shortage.  The  RBZ’s handling of the matter since making the announcement has caused confusion among an already sceptical public, fueling protests and panic withdrawals.
We trace the major events since the central bank’s initial ‘bond note’ announcement.
May 4 -The RBZ calls an emergency press conference where governor John Mangudya announces plans to introduce bond notes. He does not give a specific date and only says the notes will be in circulation in “two months time.”
May 6 – Mangudya ‘clarifies’ his initial statement, telling editors of the national press that the bond notes would be introduced mainly as a 5 percent incentive for exporters. He also backpedals on plans to convert all export receipts into US dollars, rand and euros in a 50:40:10 split in a bid to spread foreign currency use beyond the dominant greenback.
May 20 – A senior RBZ official, Morris Mpofu tells a Chamber of Mines meeting in Victoria Falls that government has hired a German firm to print the bond notes.
June 9 – President Robert Mugabe tells a  Zanu Pf Central Committee meeting that plans to print the bond notes — which he called a surrogate currency — will go ahead despite public criticism. He says the public will eventually accept the notes.
August 2 –  Former Vice President Joice Mujuru challenges introduction of bond notes as legal tender in the Constitutional Court.
August 3 – Protests erupt over the planned introduction of bond notes as negative sentiment grows
September 15 – While presenting the Midterm Monetary Policy statement, central bank governor Mangudya says bond notes will start circulating by end of October.
September 23 – Businessman Frederick Charles Moses Mutanda approaches the High Court seeking to have the introduction of bond notes declared ‘unconstitutional and an infringement on his fundamental right.’  Judge president George Chiweshe reserves judgement in the case.
September 28 – The Constitutional Court rules that Mujuru’s challenge is premature and speculative since the notes are not yet  in circulation.
October 27 – At a meeting with business representatives, Mangudya refuses to indicate when the notes will be launched and says the RBZ will have to embark on a national public awareness campaign first.  Advertisement