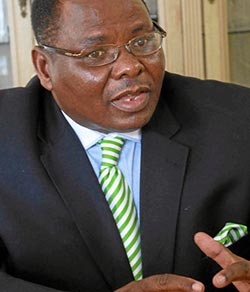 ZANU PF MP for Mutoko South, David Chapfika, said the current cash shortages Zimbabwe is experiencing are being caused by economic saboteurs who are discounting “Bond notes” at international destinations.
The parliamentary portfolio committee on Finance chair also suggested that a local currency would ease the problem.
“Even if we are to adopt the South African Rand somebody will go with it at Victoria Falls International Airport, at Oliver Tambo International Airport and even at Gatwick and say Zimbabweans are using Rands give me currency and I will give you the Rand at a discount and that is what is happening with the Bond notes,” said Chapfika.
He was addressing a civil society political dialogue meeting held in the capital recently.
“It (bond) is being taken across and it is being discounted, the US dollar is being paid at a premium and any other currency could be subjected to that,” he claimed.
Prior to the introduction of Bond Notes last year, economists warned that the same currency which government pegged to the US dollar value was going to be traded at a premium and barely six months after that the Bond notes are being sold at the parallel market.
Chapfika, who is also a former deputy Finance minister, said policy inconsistencies were causing speculation and market distortions.
“These are some of the issues we are looking at as a committee to say what currency should really be used and we need your input in this regard because you are the consumers who are facing these daily challenges,” he said.
Economist Dr Godfrey Kanyenze said corruption by senior government officials was the root cause of the prevailing liquidity crisis.
“The president has said the country lost $15 billion diamond revenue and I am not like the President and I am saying we needed just $1 billion and we will not be talking about liquidity crisis,” he said.
“Part of our challenge here is a lack of stewardship; it’s not a liquidity crisis. God has blessed this nation with resources and when I go to Rwanda I get angry about Zimbabwe that country does not have natural resources it only has tea, coffee and some wild animals but its economy is booming,” he said.Advertisement