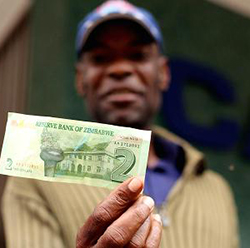 ZIMBABWE’S newly-introduced trade currency, the bond notes, will not address the country’s underlying macro-economic challenges, despite trade currency increasing the cash supply, boosting liquidity and attenuating deflationary pressures, the World Bank has said.
In a report titled “Zimbabwe Economic Update: The State in the Economy”, released Wednesday, the World Bank said Zimbabwe’s growing public debt burden and a large, fragmented public sector continued to threaten fiscal sustainability.
It said fiscal expansion in 2016 triggered a liquidity crunch and prompted banks to limit cash withdrawals.
“External debt, most of which is in arrears, accounts for two-thirds of the debt stock. With limited access to international capital markets, Zimbabwe has increasingly turned to domestic debt financing, largely through the banking system. The domestic financial sector covered most of the widening fiscal deficit in 2016, and as banks depleted their United States dollar reserves, many were unable to accommodate withdrawals. Cash shortages developed in early 2016, forcing banks to limit both cash withdrawals and import payments,” the report said.
“[The] new bond notes introduced in November 2016 have eased liquidity shortages, but are unable to address the underlying macroeconomic imbalances. The bond notes have increased the cash supply, boosting liquidity and attenuating deflationary pressures. However, further issues of bond notes will need to be carefully monitored to contain inflationary pressures.”
The bond notes were introduced under a US$200 million Africa Export and Import Bank facility and to date, US$160 million are already in circulation.
The World Bank said Zimbabwe’s total public debt stock had grown rapidly, reaching 70% of gross domestic product (GDP) in 2016, adding the liquidity crisis also contributed to a narrowing of the current account deficit.
“While a decline in imports has narrowed the current-account deficit, Zimbabwe’s external position remains precarious. A combination of tight credit conditions, the inability of Zimbabwean banks to honor international payments, and import restrictions caused imports to contract by about 14%. Meanwhile, exports increased by about 2.4%, and the current-account deficit contracted by six percentage points to 4.1% of GDP in 2016,” the report read.Advertisement

In April, the International Monetary Fund (IMF) said Zimbabwe required a comprehensive policy package to retrieve the economy from the woods, instead of expecting salvation to come from the bond notes.
IMF African Department director Abere Aemro Sellasie said: “There is a limited amount of foreign exchange inflows coming in and no monetary policy tool. So, they are in a difficult circumstance right now.
“We think that going down the one bond note route, in and not itself, will not address the challenges that the country has. So it’s more important to have a more comprehensive policy package, which also addresses a lot of the fiscal challenges that the country faces, a lot of the structural reforms that have to be done.”