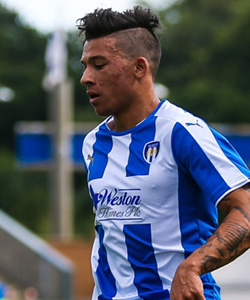 MACAULEY Bonne’s brace for Colchester United in their Johnstone’s Paint Trophy defeat at Northampton Town will be a big confidence boost for the striker.
That is the view of U’s boss Tony Humes, who believes the youngster will be lifted by his excellent double at Sixfields.
Bonne has led Colchester’s forward line in each of their last six matches, with captain Chris Porter sidelined with an ankle injury.
The 19-year-old has netted three times in that period and boss Humes believes the experience he has gained over recent weeks will be beneficial.
Humes said: “Macauley is a goalscorer – he’s proven that all of the time that he’s been at the club.
“He’s done himself the world of good with two goals (against Northampton) and he’s learning bit by bit.
“There are still elements of his game he has to get better at but he’s a threat, as he showed (against Northampton).
“He scored two very good goals (against Northampton) and he was very composed and took them well.
“I was delighted for him but it’s just sad that he ended up on the losing team, having scored twice.
“He’s still a very young man – he’s a 19-year-old still learning his trade.
“What he’s been through over the last six games will have done him the world of good.”
Bonne only played against Northampton after deciding against linking up with Zimbabwe for their African Nations Cup qualifier against Guinea.
He was due to miss the Northampton game but the U’s received news of the striker’s call-up after the deadline when clubs are obliged to release players and he elected to stay in Essex.
“The club and the player have to be notified at a certain time,” said Humes.
“They (Zimbabwe) missed that and Macauley wasn’t keen on going.
“He’s experienced it before which he enjoyed but it’s his own personal decision that he didn’t want to go – he’d rather be available and take his opportunity with us.”
Report taken from The Daily Gazette.Advertisement