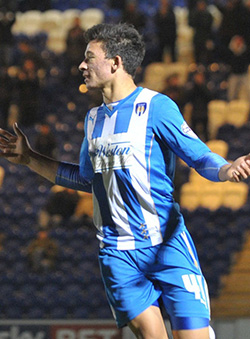 COLCHESTER United forward Macauley Bonne admits this season promises to be one of the biggest of his career so far.
And the Zimbabwe international says he is taking tips from team-mate Chris Porter in a bid to become a regular scorer for the U’s.
Bonne is hoping to hold down a regular starting place in Tony Humes’ side, as they embark on an eighth successive League One campaign.
The 19-year-old made ten appearances for the U’s last season – and is hoping to become a more permanent fixture for them this time around.
Bonne said: “I think this season will be one of the biggest of my career.
“I’m 19 – turning 20 soon – and I want to be comfortably playing in the first team in League One.
“I want to be getting regular minutes and hopefully achieve my target of being a goalscorer in the first team.
“I’ve still got more to do to get where I want to be but I’m sure I’m on the right track to get there.
“The target is always to score as many goals as I can and as long as I’m getting opportunities to score, I must be doing something right.”
Bonne says he has been learning a great deal from experienced team-mate Chris Porter, who has more than 400 career games under his belt.
“I watch Chris in training and learn parts of his game and they’re starting to come out in me,” said Bonne, who made his U’s senior debut against Shrewsbury Town in October, 2013.
“He pulls me aside in training and gives me advice on what I need to do and takes me under his wing.
“He’s been there and done it and he knows what it’s like being a young centre-forward trying to come through and be that target man.
“I’ve learnt a lot from my time in the first team so far, playing with the likes of Clinton Morrison, Jabo Ibehre and now Chris Porter.”
Bonne is now looking forward to Colchester’s opening-day game with Blackpool on Saturday.
“Blackpool at home is a great game to start the season with,” added the former Ipswich Town youngster.
“After the way we finished last season, we should get a nice crowd here to cheer us on.
“We showed a lot of quality at the end of last season in particular and we want that to carry through to the start of this season and beyond.”Advertisement