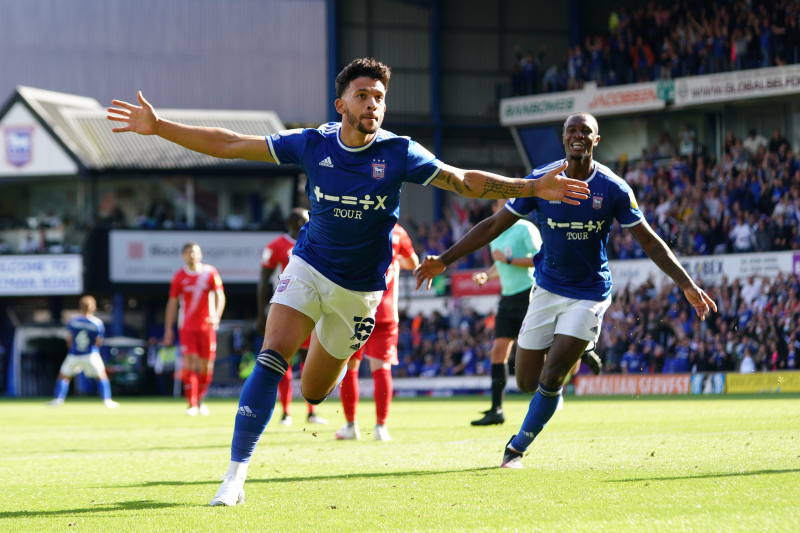 ZIMBABWEAN striker Macauley Bonne has been voted Ipswich Town’s Player of the Month for August.

The free scoring striker became a firm favourite with the Blues faithful before he’d even made his competitive debut, revealing just how big a fan of the club he was growing up.

And his popularity levels have risen further since then, the Zimbabwe international scoring a late leveller on the opening day against Morecambe and then quickly bouncing back from a bad miss at Cheltenham with a fine brace against MK Dons.

Bonne – who is on a season-long loan from Championship club QPR – received 56% of the fans’ vote for the Player of the Month for August, which was hosted by the club’s Twitter account.

Former West Brom winger Kyle Edwards, who has excited since arriving on a free transfer, came second (33%) ahead of Rekeem Harper (7%) and Kane Vincent-Young (4%).

Bonne had already scooped the club’s Goal of the Month prize for his superb opener against the Dons.

Bonne proved himself with Leyton Orient in the National League. He scored 55 league goals across the 2017/18 and 2018/19 seasons to earn himself a move to newly-promoted Charlton Athletic in the summer of 2019.

He scored 11 goals in the Championship that season but the Addicks were relegated, and soon after the start of the last campaign he was snapped up by QPR.

But Bonne would play back-up to another summer signing in Lyndon Dykes, falling further down the pecking order following the January arrival of Charlie Austin.

Bonne managed just three goals in 34 Championship outings for QPR last season with many of his appearances coming from the bench leading to his departure in search of regular first team football.

Since joining the Tractor Boys though, Bonne has quickly rediscovered his form and looks to have a promising season ahead of him.

Bonne was included in Zimbabwe’s squad for the recent World Cup qualifiers against South Africa and Ethiopia.

However, an EFL agreement to refuse international call-ups for games on the UK government’s red travel list meant the Blues front man was not involved in the matches.

The EFL have followed the lead of the Premier League and other European governing bodies by agreeing not to release players for games in red list countries, due to the required 10-day isolation period required on their return and the health concerns related to traveling to those countries.