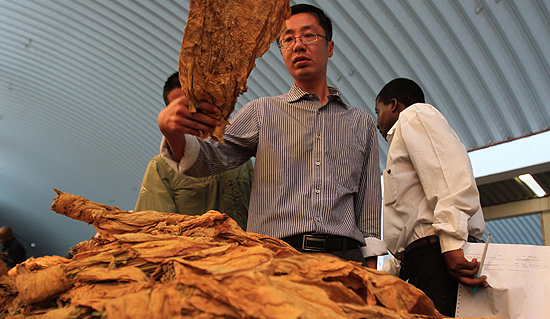 HARARE: Tobacco processor Boost Africa says it expects a 47 percent increase in tobacco deliveries after increasing the number of farmers under its outgrower scheme by 50 percent.
The local company, which started operating in 2010, is one of 16 contract buyers licensed by the Tobacco Industry and Marketing Board (TIMB).
As of Monday this week, the company had bought 5,4 million kg of tobacco worth $14,2 million at an average price of $2,62 making it the third top buyer.
Chinese firm Tian Ze remains the top buyer, having bought 8,1 million kg of the crop worth $30,3 million followed by MTC which had bought 7,6 million kg of tobacco worth $20, 1 million.
Gordon Cannon, Boost Africa’s agronomy manager, said the company’s target this year was 14 million kg up from the 9, 5 million kilograms last year.
“We have had an increase in farmers of about 50 percent to 8,564 so we are expecting to get more tobacco by about as much as 47 percent compared to last year,” he said.
Cannon said up to 20 percent of the farmers they contracted last year had defaulted on loans.
“Last year was not a good year in terms of defaults but our target this year is to recover from between 90 and 95 percent of the farmers. It is still early in the season to tell how we will perform, but our preliminary assessments from the fields shows that we will do better than last year.”
Tobacco is Zimbabwe’s biggest export earner, far outpacing receipts from platinum or gold. Last year the country produced 189 million kg of the golden leaf, earning $855 million.
This year production is seen falling 15 percent to 160 million kilogrammes after an El Nino-triggered drought caused long dry spells that forced farmers to delay planting, affecting output.Advertisement