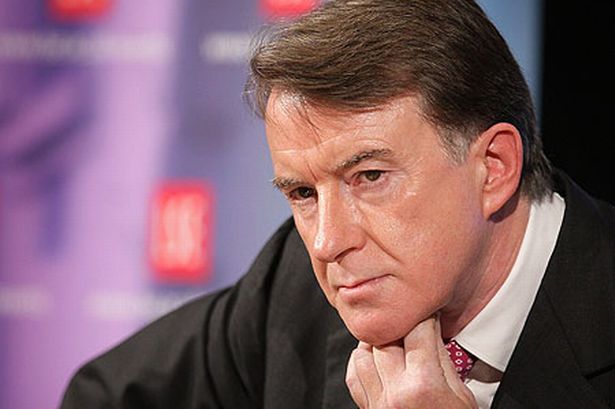 ROBERT Mugabe remains in power in Zimbabwe. His 36-year reign has set new standards in vanity, mismanagement, corruption, outright theft, oppression, and organized violence against opponents.
Over three million Zimbabweans have fled. The rich country’s economic ruin was symbolized by the issue of banknotes with a paper value of 100 trillion Zimbabwe dollars (14 zeroes). They are worthless but make entertaining birthday presents for children.
His finance minister since 2013 is Mr Patrick Chinamasa, formerly a long-serving Justice Minister. In Mugabe’s government, that title has an Orwellian tang.
Chinamasa was rewarded for his role in destroying the rule of law with two stolen farms and being entrusted with what is left of the economy. His urgent task this year is to procure an international bailout so that the regime can afford to pay its civil servants, police and army and most importantly, Mugabe’s private army of thugs.
Peter Mandelson has worked for Lazard Bank since 2011. He is described as Chairman of Lazard International. It is terribly hard to discover what this part-time post entails, or the exact size of the bundle of money he gets paid for it.
In February this year he popped into Zimbabwe and, with the help of our ambassador, Catriona Laing, held an unreported meeting with Mr Chinamasa. A few months later Mr Chinamasa was engaged in intense negotiations on a bailout – with Lazard.
When Mandelson’s meeting and Chinamasa’s negotiations were eventually reported in the Sunday Telegraph on August 7 they caused a storm of protest both here and in Zimbabwe, and widespread speculation that the British government had secretly abandoned its opposition to a bailout while Mugabe remained.
A spokesman for Peter Mandelson hastily denied that there was any connection between Mandelson’s visit and the bailout talks with Lazard. No, no, no, he went to Zimbabwe only for the purpose of “meeting representatives of the business community and civil society to encourage them to continue the process of reform.”
The Foreign and Commonwealth Office believe this flannel and flummery and issued statements supporting it. They have assured me that Peter Mandelson paid for the trip himself.Advertisement

I find this hard to believe – and not from any personal bias against him but because it costs a tidy sum to jet into Zimbabwe and stay there in a top-class hotel. Although I personally paid for my own undercover visits a few years ago very few politicians dip into their own pockets to visit a country just to deliver a bucket of bromides!
I also find it hard to believe that Peter Mandelson gave no report of his encounter with Mr Chinamasa to his employers at Lazard before they entered detailed negotiations with him. If I were a shareholder of Lazard, that would make me query his value to the bank.
I wonder also why the FCO thought there was any value to Britain in Peter Mandelson’s mission. He has no previous relationship with Zimbabwe that I can discover. Certainly he has never attended one meeting of the All-Party Parliamentary Group on Zimbabwe which I chair and which has many members from the House of Lords.
Representatives of the surviving business community and civic leaders do not need to be persuaded of the case for reform – they are desperate for it. There is no point in preaching to Chinamasa, who is a creature of Mugabe and has no future in a post-Mugabe settlement.
Why does the FCO see Peter Mandelson as a persuasive advocate in any country? He has not won an election for himself since 2001 nor taken part in a winning political campaign for any party or cause since 1997. In the recent referendum, his public interventions for the REMAIN campaign were eagerly awaited – by the LEAVE campaign.
This episode calls for an urgent response from our new Foreign Secretary, Boris Johnson.
On Zimbabwe he must reaffirm Britain’s position in the most robust and colourful language he can command: no money, no bailout until Mugabe disappears from power and influence for ever.
He also needs to review the use of our missions overseas and the whole conduct of British diplomacy.
Our missions must not act as a speed-dating bureau for any passing VIP, whether from politics, or business or any other field.
Our overseas diplomats need to be particularly wary of requests for help from visiting politicians, current or former, since it has become so easy for them to pick up lucrative jobs with outside interests, including foreign companies and even foreign government.
They need to ask: “Why are you really here? Who is paying you? Whom are you reporting back to?” They need answers they can trust. If they cannot be certain that the visitor is not representing some private interest they should tell him to fend for himself.
Apart from Lazard, Peter Mandelson has a relationship with Glencore, the giant minerals conglomerate, which has interests in Zimbabwe. It is a client of his shadowy consultancy, Global Counsel, although this was revealed by the media and has never been declared on the House of Lords Register of Interests. Glencore needs and deserves no help from any of our missions.
More importantly, Boris Johnson should end any assumption that our missions should always help Britons to do business in their host countries.
He should set minimum standards of good governance and observance of the rule of law. When he knows that British business or other activity gives benefit to a corrupt or repressive regime – and makes our country more dependent on it – our missions should not encourage it. Apart from Mugabe’s Zimbabwe, I personally would apply these tests to the regimes in Venezuela, Saudi Arabia, China, Russia and quite a few others.
He should end any comforting pretence that better links with repressive regimes help to promote reform and liberalism. The weight of history is against this idea. It failed with Nazi Germany. It failed with apartheid South Africa. It is failing now with present-day China.
Finally, he should end the use of secret emissaries to conduct diplomacy overseas.
They inevitably encourage host governments to imagine that they are more significant channels than our regular diplomats, and that our government has entrusted them with a private agenda. We taxpayers should not be represented in any country by vain, self-important people– or even competent ones– who are beyond the reach of Parliament and face no assessment of their performance or results.
If we have anything to say to a foreign country, it should be delivered only by a Minister or a trained diplomat not a Peter Mandelson.