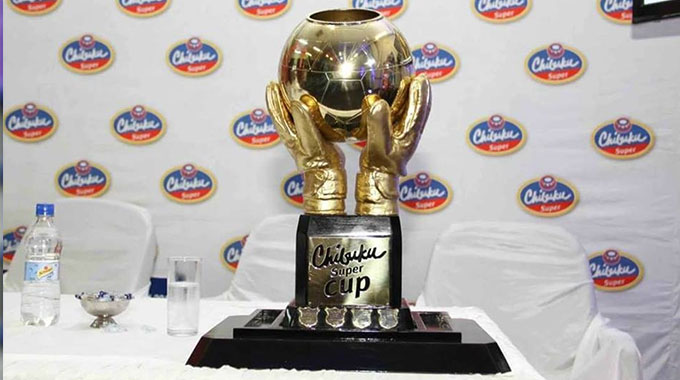 ZIMBABWEAN football giants, Highlanders and Dynamos, are facing the prospects of ending the season without any silverware after they were knocked out of the Chibuku Super Cup in the quarterfinals Sunday.

Their hopes, however, ended in disappointment after losing 1-0 to Bulawayo Chiefs in Sunday’s quarterfinal clash played at Barbourfields Stadium.

Both teams finished the match with 10 men with Highlanders defender, Peter Muduhwa, and Obriel Chirinda of Bulawayo Chiefs being sent off in the second half for different offences.

Muduhwa appeared to have been sent off for a second bookable offence midway in the first half for a foul inside the box before the referee inexplicably reversed his decision after consultations with both the players and his assistant.

Chiefs were, however, still awarded a penalty but failed to utilise the opportunity as Chirinda, who had won the penalty failed to convert after being denied by the Highlander goalkeeper Ariel Sibanda.

It was a bad afternoon for Chirinda, who was red carded in the 87th minute before Muduhwa followed him for an early shower three minutes later after finally being sent off at the second time of asking for an elbow on his opponent in the 90th minute.

However, by then, Bosso were already chasing the game with Bulawayo Chiefs having taken the lead in the 67th minute after Malvin Mkolo headed home Arthur Musiyiwa’s cross.

Chiefs held on for a famous win which secured them a place in the semi-finals, where they will face army side Black Rhinos.

Rhinos reached the last four courtesy of a 10-9 sudden death penalty shootout victory over Chicken Inn. The teams were tied at 1-1 at the end of the regular time.

There was also no joy for Harare giants Dynamos as they lost 4-2 on penalties against FC Platinum at the National Sports Stadium.

The two teams could not be separated in regulation time as they settled for a goalless draw in a cagey affair before FC Platinum secured the penalty shootout win which keeps them on course for a league and cup double.

FC Platinum, who are the defending champions, will play Herentals in the semifinals.

Herentals booked their place in the semis after a 2-1 win against Manica Diamonds at the National Sports Stadium on Saturday.