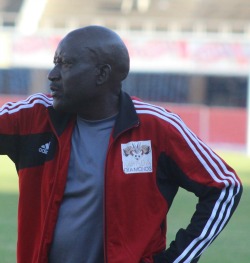 Highlanders 1-1 Dynamos, Buffaloes 0-3 FC Platinum
RETURNING striker Takesure Chinyama scored three minutes after the breather to ensure Dynamos maintained their dominance over Highlanders in a Castle Lager Premier Soccer League match played before capacity crowd at Barbourfields Stadium Sunday.
Mthulisi Maphosa headed Bosso in the front after 27 minutes from a corner by Obadiah Tarumbwa before Chinyama’s equaliser.
Chinyama had earlier ‘scored’  the equaliser for Dynamos in the 37rd minute but referee Philani Ncube, who had a firm hand on the game dishing our four yellow cards, disallowed the goal after adjudging that the big striker had barged into Highlanders goalkeeper Njabulo Nyoni from behind before scoring.
Dynamos fans protested that goal by throwing missiles into the field of play, forcing Nyoni to briefly flee his goal area but order was swiftly restored.
Dynamos secretary Webster Chikengezha attempted to whip the emotions of his side’s fans by handing in a letter to the match commissioner Ndaba Ncube, saying they were playing under protest due to biased match officiating, but to no avail.
Maphosa failed to finish the game as he was stretchered off in the 63rd minute due to a knee injury that Highlanders coach Bongani Mafu described as “serious”.
“He has had a serious knee injury in the past and I don’t think we will see him again this season,” Mafu said.
On the match, Mafu said: “We had Dynamos where we wanted, but again, we could not finish them off. We should have stuck to the game plan not having too many boys behind the ball.
“You can turn and twist (referring to Tarumbwa and Knox Mutizwa), but when you are in those positions you need to shoot at goal. King Nadolo can do that because he is the middle of the park.
“We needed a win from the match, Highlanders needs a win; that is what we are all about,” Mafu said after the match.
Dynamos coach David Mandigora said while they were looking for three points, he was still happy with taking four points off Bosso this season after a 3-2 reverse win.
“In the first half we did not play well, but we came back in the second half and we did well that’s why we even scored after the restart, but we needed a win from the match,” Mandigora said.Advertisement

On referee Philani Ncube’s performance, Mandigora said: “I don’t want to stay much about the referees.”
Ncube added one minute injury time in the match as the game ended level.
While there was preaching of violence in the match, the match was played in a peaceful manner and the fans simply walked away from the stadium peacefully when Ncube blew his whistle.
In the field of play, players from both sides hugged each other in a true spirit of friendship, much to the chagrin of those who had expected violence as the police kept a close eye on proceedings in and outside the stadium.
At Sakubva, FC Platinum’s Brian Muzondiwa scored a memorable first half hat-trick as they pummelled Buffaloes 3-0 to maintain fifth spot with 28 points, one behind Dynamos and How Mine.
Muzondiwa struck in the 28th, 32 and 44th minute to seal a good win for coach Norman Mapeza’s team as they slowly climbed into title contention.